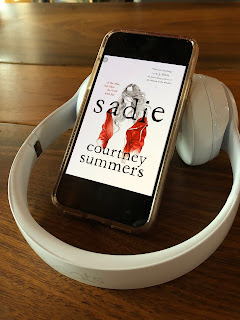 Sadie by Courtney Summers (September 4)
Overview: Sadie is unlike any book you have ever read or will likely read again. It's dark, gritty, mysterious, and, shockingly, scarily, real. Told through transcripts of podcast, The Girls, and a handful of first hand accounts from Sadie herself, we learn the story of two sisters; one dead and one missing. West McCray is the reporter tasked with investigating Sadie's disappearance in the wake of her sister Mattie's murder after the police give up the search. As he patches the many frayed ends together, the picture grows in our heads of what Sadie saw and how her her story ends. Overall: 4.5

Characters: 5 Sadie is strong, brave, and determined to avenge her sister's death and her own abuse. She's never had the room she needs to have her own feelings because she's spent her life caring for her younger sister since her mom was an addict. When her sister dies, Sadie has nowhere left to turn but the road where she has to sort through how she feels about her sister's death and her place in life.
West McCray is a reporter who never wanted to chase missing girls. But he dedicates himself to Sadie's case once he's assigned it. As the host of the podcast, he makes for a mostly objective narrator and our guiding lens into the people's lives that Sadie passed through as well as her adoptive grandmother's devastated reality. Each character West meets along the way speaks for himself and, in turn, builds the reader an even richer prospective of these people than when we first meet them through Sadie.

Plot: 5 Wow. There's no way you're going to be able to put this book down once you get started. Every chapter following Sadie cuts at the most breathtaking moments. The podcast episodes give context to her experience and make the pieces click together in your head.

Writing: 4 It took me a second to really get into the story. I wasn't a fan of Sadie's chapter's at first, but the podcasts kept me reading. Eventually, Sadie's chapters started to sparkle as much as the transcripts. The way the book is framed is genius. Using multiple prospectives allows Summers to create a truly rich picture of the events and the people they happen to. Toward the end, every twist leaves something shocking to digest. I wasn't sure what to expect from all the hype, but it's easy to see that Summers has earned it.

Look out for an interview with the author on September 5, the day after Sadie's book birthday, right here!


Other Books By This Author:
All The Rage: Review Here