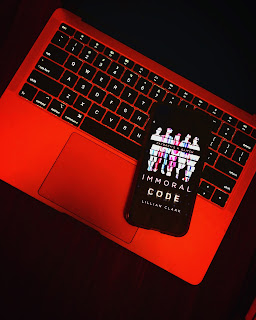 Immoral Code by Lillian Clark (February 19)
Overview: Five teens- one big heist. A group of friends band together to commit the ultimate in hacking to siphon off enough money to send their friend Bell to college at MIT. Because of her absent father's immense wealth, Bell gets rejected for financial aid at the school of her dreams. Not that her father is agreeing to pay any part of tuition, or even acknowledge her existence. Outraged at this, Nari, coding genius, creates a plan to play Robin Hood and ropes their other friends into risking jail time for Bell's dream. Will they pull off a job that would be ambitious for a team of professional hackers and con men or will they face the steep consequences and ruin five lives? Overall: 4

Characters: 4 There's a crowded stage when it comes to characters, but that doesn't mean that their individuality gets sacrificed. Bells is a science genius with a bright future despite having to fight against the near poverty her father sunk her and her mother into when he abandoned them when they were still in high school. Bells wants to earn enough money to one day support herself and her mother.
Nari is a coding master. She can manipulate computers like no one else. Her boyfriend Kegan is her perfect counterbalance. Nari is going to take over the world, and Kegan doesn't know where he fits in it yet. All of his friends have their own drive, but he's not even sure if he wants to go to college. I like how that narrative was played out, and it was a good reminder that not everyone has to have life figured out from the jump.
Finally, there's Reese and Santiago. Reese is acearo, yet she's treated like the school slut because of her died hair and out-there clothes. She's learning what her identity means to her while also coping with discovering her mother's affair. Her family relationship is most explored of all the characters, and, while it doesn't get too deep, it definitely adds to her character arc.
Santiago is a state champion diver with a full scholarship to Stanford. It sounds like his life is perfect and his parents should be so proud. Instead, they're barely speaking to him because he wants to try his diving talents at the Olympics. While his parents believe why fail at being extraordinary when you can be extraordinary at being ordinary, Santiago is ready to reach for the stars, but he has to prove to himself that his parent's doubt is unfounded first.

Plot: 4 While it is a heist story, the plot to take the money takes a backseat to the stories of friendship. I loved getting to see how they interacted as a group and then how they worked with each other as individuals. Even though they might have gotten off a little easy when their plans hit snags, it's a fun story with some laugh out loud moments.

Writing: 4 I thought that Clark did a nice job balancing an ambitious five POV story. Each of their prospectives were unique, and they helped me get more familiar with each character. I loved how individually motivated they all are and how these motives manage to intersect.

Make sure you come back Friday to read my interview with Lillian as we discuss plotting Immoral Code, writing five points of view, what she's up to next, and more!


Links of Interest:
Tash Hearts Tolstoy: Review Here
What's Coming Up In January: Here
A Danger to Herself and Others: Review Here
This Is Not A Test: Review Here