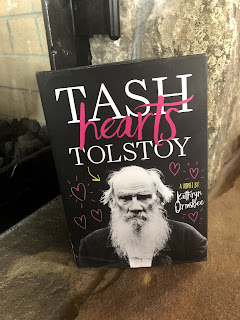 Tash Hearts Tolstoy by Kathryn Ormsbee (372 pages)
Overview: Tash has a lot going on. Her family is unsettled with impending arrivals and sisters leaving the nest. She's co-running a You Tube production company that explodes with her best friend Jack, and she's grappling with her sexuality and the possibility that she's ace. New fame, new family, and possibly new romance all threaten to make Tash's world explode, but, somehow, she's keeping it all together. Overall: 5

Characters: 5 Tash is so amazing! She's a real human being that springs to life and invites you to see the world through her eyes. One thing that I particularly love is that, even though Tash doesn't believe it, you know she's smart by the way Ormsbee chooses the perfect words and mature sentence structure. Trying too hard to make characters smart is something a lot of authors falter with, but the execution of presenting Tash's personality is perfect. The way that Tash deals with her changing family situation, her new fame, and her friendships is wonderfully honest. I also love that this book has ace rep! It's one part of Tash's identity, but it's an area of the LGBTQ community that rarely gets attention, and it's awesome to highlight it here. I also love the brief discussion of religion and that Tash has chosen to be Buddhist like her mother and interacts with her faith on different levels of involvement. Her heritage and religion are seamlessly blended into her personality.
The Harlows, her neighbors and best friends for life, are also amazing. Paul and Jack have been around forever and their intimate friendship is awesome to read about. I really identified with Jack's unflinching, uncompromising individuality, even, as Tash points out, is slightly to her detriment. Paul is easy going and quiet, but that sometimes means his feelings get missed in the face of the girls's outgoingness with one another and their projects.
The parents are also a great part of the book. Tash's relationship with her parents grow and change, as does her bond with her older sister, but I found the portrayal realistic and fun to read. The teens also grapple with Mr. Harlow's returning prostate cancer, and that depiction felt true to life as well.

Plot: 5 The book has tons of plot, romance and failed romance and rocky friendship and sudden fame, but it's also a great slice of life story. Tash deals with tons of situations that feel familiar, and the way she ponders them makes you feel like you're just having a conversation with your best friend.

Writing: 5 I LOOOOOVE Ormsbee's writing. the way that she crafts the characters is stunning, and the world comes to life around Tash in a way that is rich and fulfilling. She takes on lots of serious, and sometimes gut wrenching, topics, but she handles them expertly and with tact. Also, I love how she balanced the story so that there were many balls up in the air, but they all juggled around in perfect precision. There wasn't one that encroached on another.
Having read Tash's story, I'm even more excited to dive into my ARC of Ormsbee's next book, The Great Unknowable End which hits shelves February 19th. Check back for my review soon.


If You Like This Book...
Eliza and Her Monsters: Review Here