Eliza and Her Monsters 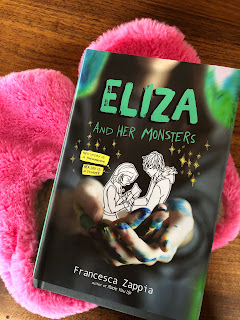 Eliza and Her Monsters by Francesca Zappia (385 pages)
Overview: Eliza is regarded as a freak at school. Sweatpants and oversized clothes with her lanky frame must mean she's dangerous. Kids avoid her like the plague, and that's fine because that's who Eliza Mirk is. Even Eliza Mirk doesn't like being Eliza Mirk, but she loves being LadyConstellation, beloved creator of the online webcomic Monstrous Sea. No one knows LadyConstellations real identity (not for lack of trying) and the online world and fandoms gives Eliza a chance to be the invincible person she can't be in real life. And then Wallace transfers into school, and he's a Monstrous Sea fan. Though weary at first, Eliza hides her identity as she bonds with Wallace and realizes that the world outside of her screen might not be as poisonous as she believed. But with each day, the truth creeps closer and closer to the surface, and disaster strikes when it comes out. Overall: 5+++++++++ (I'm still so in love and in awe of this book. Way too many feelings)

Characters: 5 Eliza made me want to cry. Not in a bad way, but in that relieved way- like when you know you're not the only one. She's strong and powerful and successful, but the outside world won't look at her long enough to see that, so she's belittled and shoved around until she learns how to disappear into herself. She lives for the slivers of the day when she can disappear into the world she created, when she has room to be herself. No one quite understands her relationship with the world or the internet, and it keeps her at an arms length. She battles with depression and anxiety intermittently as the world throws hurtles at her. She's not afraid, and she's not broken, but sometimes she feels like she gets lost inside herself and inside of a world that wants to many things from her. Also, Eliza's two favorite kinds of food are sushi and boiled eggs which also happen to be my favorite foods which was super cool.
With her family, she has her parents and two brothers. Her parents struggle to understand what's so important about Monstrous Sea. They don't even know that she's made enough from it to pay for college and then some. Because she doesn't fit their conventional idea of success, they can't look close enough to understand her. I also love her relationship with her two younger brothers. She feels like she can't connect with them, even if she might want to, because their interests are so divergent, and I think that's how a lot of siblings feel.

Plot: 5 Eliza's world starts small, contained, in her control. Though her school situation sucks, it's been a reality long enough that she's developed armor against it. She has her two closest online friends who moderate her Monstrous Sea sites and forums, and she interacts with the fans as LadyConstellation, but her family are really the only people she interacts with.
And then Wallace comes into the picture. He's had to transfer mid year and struggles with selective mutism. Most strikingly, he doesn't think Eliza is a freak, and she doesn't know how to respond to that. As they grow closer, holes get poked in Eliza's bubble of control, and when a mistake sends the whole rest of the real world rushing in way too fast, Eliza shrinks again, into an even smaller world than before. I loved how Zappia portrayed the way that the world can zoom in and out to accommodate how tight of a hold we need in the world in comparison to the stress, anxiety, or depression we may be experiencing. Eliza has to figure out how to be a part of the greater society on her own terms.

Writing: 5 I absolutely adore how this books was written. I felt so close and connected with Eliza. My heart raced when hers raced and broken when hers broke. I got fully immersed in the story. I love the short chapters and the editions of Eliza's art, her IMs, email, and letters. It made me feel like I was deeper into her world and her mind than just the prose alone. Zappia used the nearly 400 pages to give such an expansive picture on the rollercoaster of life- the slow chug up hill, the air stealing woosh of the fall, and the careful climb up again.


Books By This Author...
Made You Up: Review Here