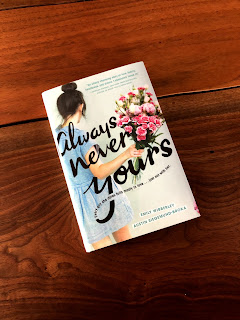 Always Never Yours by Emily Wibberley and Austin Siegmund-Broka
Overview: Megan is not Juliet Capulet, but her drama teacher, Jody, disagrees. Megan didn't even want to act in the school production of Romeo and Juliet, but to get into the theater school of her dreams for directing, she has to have an acting credit on her resume. She only intends to get a few lines, not play lead opposite her ex-boyfriend, and current best friend's boyfriend. Even as she tries to embrace the role, the only character Megan can identify with is Rosaline because all of her relationships, over ten of them throughout high school, have ended in the guy leaving her for the "perfect" girl, but maybe that's about to change. Overall: 4

Characters: 4.5 I liked Megan. She's bold and uncompromising in the way she presents herself. She's unafraid of dating or the reputation that it gives her. She seems so confident in herself that it's hard for others to remember that her soft interior can be shaken. Megan struggles a lot with relationships and what constitutes a good or worthy one. The patterns she's observed in her own life and with her parent's divorce she's internalized the belief that relationships that involve her cannot last.
To fill her world are the people who look close enough to notice like new drama recruit, Owen, and there are those who are too caught in their own narrative to notice Megan in the collateral. Despite Megan's complicated feelings toward her parents, both her stepmother and her mother's boyfriend are very supportive of her, as are her parents, which creates an interesting dynamic of a shaky support system on a strong foundation.

Plot: 4 This book is full of twists and turns and ups and downs. While it's easy to chart the three act structure in this book, beats abound to keep you guessing which way Megan's romances will go. She makes great strives and steps back in healing herself from a past that has made her deeply unsure of herself. While the plot sometimes rambles, it will keep you turning the pages.

Writing: 4 Just to start, I have to say that I've never read a book written by two people in one linear, single point of view book. You can't tell that there's any duel work here as the narrative stays concise and consistent. I've actually gotten to listen to them discuss their writing process on Sarah Enni's podcast, First Draft, which is seriously worth a listen. With that said, the writing overall is strong enough to handle the meandering nature of the plot, but it's definitely clear that they gained confidence in their ability as the book progresses which makes the writing skill increase.

I'm super excited to say that I have a draft of their next book which comes out in March of 2019 which I can't wait to read and talk about with you!


Books Like This...
They Way You Make Me Feel: Review Here
I Believe In A Thing Called Love: Review Here