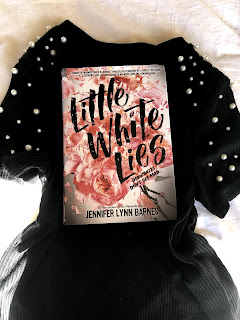 Little White Lies by Jennifer Lynn Barnes (390 pages)
Overview: Sawyer Taft is not a debutant... yet. For now, she works at a car garage making money to keep her and her mom afloat as runs off with new guys she meets at the bar. It's the only life she's known, and she wouldn't have it any other way. And then Lillian Taft walks through the front door, uninvited and announced, contract in hand. Lillian is her estranged grandmother who she's barely heard anything about, and she gives Sawyer a chance she can't refuse: Come live with her for nine months to complete a debutant year in exchange for half a million dollars toward her education. Overall: 4.5

Characters: 4.5 I loved Sawyer. She's sarcastic and blunt. She can't take anything in her new, rich, Southern world seriously, and so she provides the setting both with a Mars like feeling and one of a grounded world. Sawyer meets her new family including true matriarch, Lillian Taft, her aunt, Olivia, her uncle, J.D. and her cousins John Davis and Lily. All of those characters are drawn together so well. They are real and honest to the story.
Even outlandish people in the debutant world like the Ames clan and Greer Waters have a sense of both humanity and reality that I wasn't expecting from this borderline satirical book. The only character that failed to evolve from her somewhat ditsy persona was Sadie Grace who was likable but seemed to be a joke of herself.

Plot: 5 This is where it's especially clear that Barnes has written many, many books and that the books she's written have been thriller/mysteries. Sawyer's voice interplays perfectly with the plot. There's also so many things going on in the subplots, but it somehow never gets muddled. Especially for the last 200 pages, I found it impossible to put the book down.

Writing: 5 Like I said above, Barnes is skilled in both voice and intense plotting. And, wow, there are so many twists your brain will just surrender to being blown away. She made the world of the debutants totally immersive, and, while the characters are sometimes ridiculous, she grounds it in a way that keeps the book from seeming like a joke or an attack.