The YA Movie Takeover 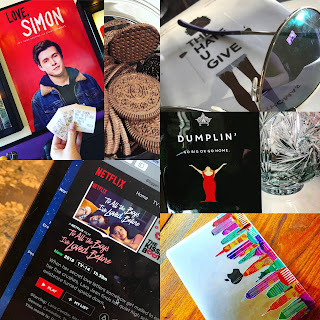 Today I'm talking a little bit about YA movies, all their different forms, and how 2018 really has been the year of YA taking over the big screen. While there have been some successful YA adaptions (Perks of Being A Wallflower, The Fault In Our Stars, Paper Towns) in the past, they've all come from major production companies and been in theaters, but that's changed this year.
The first major movie of the year, Love, Simon, falls much in the same vein as the Fault In Our Stars movie as they were both produced by Fox and got major media coverage. Love, Simon was undoubtably a big deal in its own right, but, really, it was only a glimpse into the phenomenons to come later in the year. Overall, I really enjoyed the movie, and I thought that the important parts were honored. I didn't love having to go to the theater though.
I was doubly thrilled when I heard about the To All The Boys I Loved Before movie because Netflix was streaming it right to my laptop. No waiting in lines, no sitting in an uncomfortable theater chair in the dark room for two hours with the volume waaaay too high. Usually, if I see a commercial for a movie I want to see, I forget all about it before I get to the theater.
Netflix moving into the YA market is a great move both for teens and for Netflix itself. The number of teens who have Netflix far outnumbers those who can drive themselves to the movie theater. There's no complications of which theaters are showing the movie. Those who love it can watch it multiple times easily. This allows teens to easily support their favorite movies, and I honestly think To All The Boys I've Loved Before has been so enduringly popular because Netflix broke down a barrier between their core audience and the movie.
I was super excited to watch The Hate You Give when it came to theaters. I was even willing to break my no theaters rule for it, but neither theater in my small town was playing it (not sure how that happened. I thought it'd play for sure because they had Love, Simon), so I've had no way to see it. I can't wait to see it when it's finally available to rent, but I was bummed I couldn't be a part of the viewing excitement. I think this might have been true for a lot of people because most of the buzz I saw on Twitter was about schools taking their classes to see it, which is awesome, but it does show how much goes into getting teens to a place to see the movies. Both transportation and cost are a major factor.
The last YA movie to come out this year will be Dumplin', curtesy of Netflix. I'm so excited to see the movie! This is a book that will definitely translate well to the screen, and having Dolly Parton signed on to make the soundtrack and Jennifer Aniston as one of the stars shows how big of a deal a Netflix movie can be even to those outside the core fanbase. Netflix seems to be focusing on movies that have loyal fanbases but aren't the definitive books of the time like The Hate You Give and Love Simon which is great. It allows even more diversity to come to the screen.
I'm excited that the streaming services have continued to move in this direction. For 2019, we already know that John Green's Looking For Alaska (one of my favorite books ever) is coming to Hulu as a limited series which I'm surprisingly super excited even though I'm nervous for it. As for movies coming to the theater, the All The Bright Places movie will be coming to the big screen sometime next year along with Five Feet Apart, a book that recently came out from Simon and Schuester will also be released.
What are you looking forward to for this year and next? Are you excited about YA coming to streaming services.