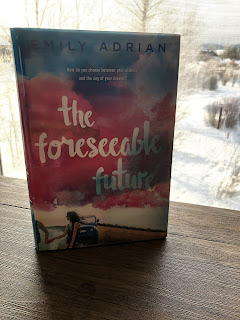 The Foreseeable Future by Emily Adrian (387 pages)
Overview: At the end of senior year, Audrey doesn't know what she's going to do with her life besides two things: She's not going to Wheton for college where both her parents are professors, and she's going to work nights at a nursing home. Both of these are to the great dismay of her parents. Audrey wants to get out of Crescent Bay, but she's not sure how yet. Over the summer, though, she stumbles into the perfect boy and the perfect job, the only problem is the job is in Seattle and the boy is firmly rooted to the California beach. She'll have to decide which path to follow before September. Overall: 4

Characters: 4 I liked Audrey. I thought that she made for a nice point of view character, and he struggles with facing college and disappointing her parents felt relatable. I could say the same about most of the other characters like her boyfriend, Seth, or her best friend Sara. The only problem is that none of the characters really develop beyond a superficial level which makes it hard to have more than passive feelings about the book.

Plot: 4 Overall, I thought that the plot was well structured and had a satisfying, pleasing ending. Though I'm not usually a fan of the boy v. life opportunity dichotomy in books, I thought that the influence of the older female characters in her life helped balance out Audrey's choices on the matter. My only complaint is that there are too many unnecessary subplots throughout. I thought that her insight on her parents marital struggles and the connections she made in the nursing home helped deepen her character, but I'm still not sure what the point of making her a viral You Tube hero was. Without that subplot, some of her other triumphs would have felt less superficial and more satisfying.

Writing: 4 Adrian writes with a brisk style that's not too assertive. It works perfectly with the summer romance story she sets up. It made for a breezy read that I finished in just over a day. If your looking for a sweet book with a happy ending than this will suit you perfectly.


Links of Interest:
Eliza and Her Monsters: Review Here
What I Want to See More of in YA: Here
Always Never Yours: Review Here
Unbroken: Review Here
New Release Wednesday Reading Weekly Reviews and Recommendations