The Art of Losing 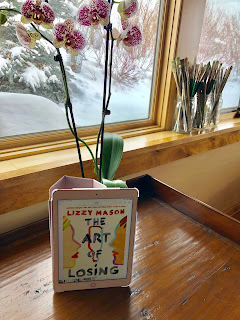 The Art of Losing by Lizzy Mason (February 19)
Overview: Audrey is in a coma. Her older sister Harley is taking the blame even though she wasn't even there. Audrey got a ride home from the party with Harley's boyfriend Mike who got into a wreck while driving drunk. Harley had already left because she found them together, hooking up in her best friends bedroom during the party. Harley doesn't want explanations; she just needs her sister to wake up. Overall: 3.5

Characters: 3 Harley wasn't my favorite. She's a bit too guilt ridden and self blaming for my taste. It's obvious that she would feel some amount of something akin to survivors guilt, but the way that Harley dwells on her part in the disaster is borderline narcissistic. She's more consumed with thoughts about herself and how this affects her than her parents or her injured sister.
The other characters just didn't have much life in my opinion. They all came off like means to an end instead of as their own, individually motivated people. Raf is there to give Harley motivational tidbits from his time in rehab and coax her along when she feels like she's hit rock bottom. Mike is the villain, and Cassidy is the quintessential best friend.

Plot: 3 For some reason, I couldn't get into the story. It starts slowly and sort of creeps along. The whole beginning of the book is sitting in a hospital room with her comatose sister and then going to get changed and shower and then going back. There's also the occasional surface conversation with Raf that slows the plot even more. It really showed no clear direction and dwelled too long in each scene for my taste.

Writing: 4 Even though I wasn't a huge fan of the characters or how the story was playing out, I did enjoy moments of Mason's prose. She captures all of the elements of the world around Harley, and she sucks the reader in with the first chapter. If the world had continued to grow and flourish instead of camping in one monotonous spot, I could have really loved the book.
Also, maybe it's just me, but I thought it was a strange choice to make nearly every character in the book a serious smoker. I've never seen (or even really heard) about many, if any, teens smoking cigarettes at school or outside of it. They've even found stats that it's at record lows among teens. Maybe if they all vaped instead it would have felt less out dated and out of touch. The abundant references made me kind of scratch my head.