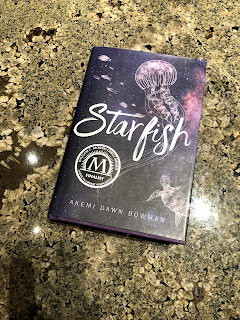 Starfish by Akemi Dawn Bowman (343 pages)
Overview: Kiko is nearly paralyzed by social anxiety. Emery, her best friend, is her lifeline, but she's leaving to spend the summer at the college she'll be attending in the fall, and Kiko doesn't even know if she got into Prism, the New York art school she has her heart set on. Kiko's trying to iron out her future, keep an eye on the prize, and ignore her narcissistic mother, but then Uncle Max moves back in, and it's too much for Kiko to take. Her mother has known for years about what Uncle Max did to her, and, yet, she treats him like nothing's happened. Left with nowhere else to turn, her old childhood friend, Jamie, offers her a place to pause and figure out a new way forward. Overall: 5

Characters: 5 Kiko is amazing. She has so much to deal with, and, instead of just crumpling it into a ball and throwing it in the corner, when she gets the chance, she unpacks her hurt and past trauma. Her social anxiety is made worse by her mother making her believe she is inferior in every way. Her mother only notices her to shame her, whether it's by calling her lazy or criticizing her facial features inherited from her Japanese father. Since Kiko's parents divorced (she blames herself for this as well), she's been entirely removed from the Japanese side of her ancestry, and her mother's derogatory words only further chip at her self worse. I love that as Kiko comes to cope with her anxieties, she uses those who she can trust as crutches, but, when she's strong enough, she develops the conviction that she has to walk on her own. I also think that it's super important that Bowman acknowledges that some of the impulses that stem from her anxiety will never go away, but, through learning to cope, she can overcome the lies that her brain wants to tell her.
Kiko has a complicated relationship with her parents. Her mother is a narcissist and is verbally abusive. Kiko is stuck between craving her mother's approval and being disgusted by her behavior. Even though she feels betrayed by her mother not believing her about the abuse she endured when she was younger from Uncle Max, she wants her mother's love. A lot of her actions in the beginning are motivated by that.
Her father is present, but she feels like he's moved on now that he's started a family with his new wife. Through false stories during the divorce and misunderstandings, Kiko has become removed from her Dad even though he loves her deeply and is just confused about how to be a part of her life.
Jamie makes the turning point for Kiko. She's familiar enough with him to feel comfortable, but they haven't seen each other in years. He's kind and tries to be accepting of the manifestations of her anxiety. It's a great friendship story with the possibility of something more.

Plot: 5 Kiko has lived in a bit of a twilight zone with her mother mixing and molding the truth to suit her purpose. She's forced to confront these lies, her own truths, and a changing world when she isn't even comfortable in her own skin. I love how Kiko channels her energy into her art and that it's so reflective of her as a person. It's also wonderful to see her have enough faith in herself to take giant leaps that she's rightfully rewarded for. The stories of friendship, mentorship, and love that intersect keep you turning the pages and rooting for Kiko.

Writing: 5 It's clear why this book is a finalist for the Morris. Bowman knows how to tell a story. She also is an expert at writing a very internal story without sacrificing plot. The voice is honest, the worries are relatable, and Kiko's experience with coming to love herself makes your heart hurt with how deeply she believed she was wrong. I can't wait to read more of Bowman's work.