The Quiet You Carry 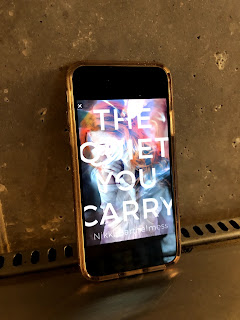 The Quiet You Carry by Nikki Barthelmess (March 5)
Overview: Victoria never thought she'd end up in foster care. She's in her senior year, nearly eighteen, when she's suddenly brought to a foster home after being put out of the house, and she's not even sure what happened. All Victoria knows is that what her father claims she did is a lie, and she's getting punished for his actions. Victoria wants out of her rigid foster life and the tiny Nevada town she gets dumped in, but, as time goes on and she awakens to her reality, she realizes that home might not be where she wants to return after all. Overall: 4.5

Characters: 5 Victoria has grit. Even when put in one of the worst situations imaginable, she keeps her head up and keeps working toward shaping her future. As she loses one thing after another, she constructs new in its place. She stays remarkably understanding and open, and her focus is strong despite dealing with probable PTSD.
Those around her are helpful and understanding. She's able to make two friends at school, Kale and Christina, despite her best efforts to keep them away. They keep encouraging her to open up, but they're never too pushy.
Then there's her foster mom, Connie, who seems like the classic, horrible foster parent, but her character evolves beautifully as Connie and Victoria teach each other more understanding from both sides of the relationship. Victoria also forms really beautiful bonds with her foster sisters, even though who's in the house is constantly changing.
Finally, there's her original family. Victoria's abusive father is gut wrenching, Tiffany, her step mother, is both upsetting and frustrating, and her step sister Sarah makes for a complicated dichotomy in Victoria's head.

Plot: 4 Victoria's story is tragic in many ways, but her devotion to turning it around is amazing. She processes grief, and she arrives on the other side of it ready to fight harder. She has to face her own learned thoughts that are keeping her from acting on it.
Over the course of the book, with the help of distance and supportive relationships, she's able to confront what has happened to her and help her step sister. Victoria has to challenge her deceased mother's dying wish to care for her father, and she has to realize this toxic, traditional notion of the patriarchy has allowed her mother and herself to become victims of abuse.
Then, she has to reconcile how far her notion of family extends as she becomes increasingly worried about and determined to help her step-sister even though her step-mother and sister didn't stand up for her when she was thrown out.

Writing: 5 I really enjoyed Barthelmess's writing style. She writes a story full of emotion and honesty. Though there are moments when her weaving of flashbacks and the present gets confusing, overall, she is a powerful writer who makes those who have never been in Victoria's position understand.

Come back Friday to read my interview with Nikki! It's tons of fun with insight about the book and some advice for writers and debuts.


I received this ARC from the publisher to give an honest review.
New Release Wednesday Reading Spotlight New Releases