Dissenter on the Bench Review 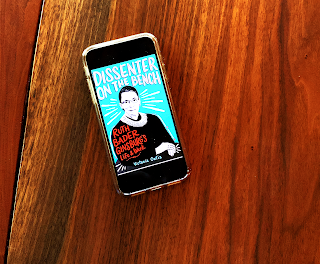 Dissenter on the Bench by Victoria Ortiz (June 4)
Overview: Ruth Bader Ginsburg is probably one of the coolest women alive. She's done countless amazing things, and she currently sits on the Supreme Court, advocating for the living and evolving nature of the Constitution. She's fought for equal rights for everyone: women, men, racial minorities, people of the LGBTQ community, and others who are taken advantage of under laws. She's crafted her career around taking gender biases out of laws that only set us all further behind. Whether her opinion is recognized or not, she always states it loudly and with perfect word selection. Beyond that, the book digs into her modern family life and her childhood. Overall: 4

Content: 4 I loved getting the chance to learn more about my favorite Supreme Court Justice (and role model). It's pretty amazing to see all of the landmark decisions she's been a part of and the work she had to put in to achieve what she did in a time where her Supreme Court nomination seemed unthinkable. While I knew the general story, it was amazing to get to digest the details over a couple of hours. Two major things stuck out to me after reading the book:
The way she made a truly modern family in a world where that seemed unthinkable and how many rights that I take as a given have been developed or cemented in my lifetime. While I don't want to minimize anything that Ruth has done professionally, I was so impressed by the family structure she built at 21 when society was totally different. She achieved a real partnership and equality in running a household and raising kids that few people fully reach even today. She ignored and confronted stereotypes and expectations to do everything her way, and it's really beautiful. It makes me wish that all of society saw this as a norm so that half the stories that spotlight their lives didn't have to be so shocking when they mention Marty's cooking prowess or their equal distribution of responsibility.
The second part of my major realization moments was reading the dates on all the Supreme Court rulings. Most of the featured cases that I assumed had been set well over twenty years ago were dated from 2009-2015 or 2016. These basic rights and hallmarks of equality were still being fought for and questioned. And many were won by narrow majorities. While it doesn't take much digging to see the challenges in the world, so many basic, obvious rights have barely been law. It's a sobering and sort of shocking realization.

Writing: 4 The book gets much stronger as it continues. The first few chapters are a bit awkward and detail laden, but, as Ruth's story begins to take off at light speed, so does the book. While I do think that a the writing level would have been a better match for a middle or upper elementary kid, I was entertained by the end. I also. did enjoy learning more about individual cases she worked and ruled on.