Into YA with James Brandon 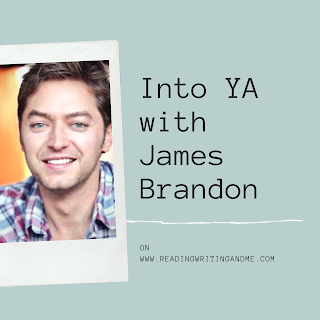 Today I'm talking to James Brandon on the blog about his new book Ziggy Stardust and Me and how he came to write the story! Hope you enjoy!

1. You’ve written a historical novel set in the 70s. How much research went into creating an accurate setting? Was it difficult to naturally write about a world and events that took place around forty years ago?

Once I knew the story would be set in the summer of 1973, I spent a year immersing myself in the time period before I began outlining and drafting the story: I only listened to early seventies music (which I now find to be some of the raddest music to date), I watched TV shows and movies, and devoured books and magazines from that time. I also spent weeks at the GLBT Historical Society in San Francisco sifting through their archives. I remember finding a set of letters from a pair of lovers who I’m fairly certain never met in real life. (They couldn’t out of fear.) These letters were written with such raw emotion, you could feel the love pounding through their words. That passion inspired Jonathan’s voice and connected me to my queer history like I’d never experienced before.
And after my thorough research, I found the comparisons between then and now eerily similar. It was a tumultuous time: Every marginalized faction of society was screaming to have their voices heard and the Watergate scandal with President Nixon’s impending impeachment was in full swing. (For starters.) Talk about “history repeating itself.” I have strong feelings about today’s current events, so it was easy (and mentally helpful) for me to channel those emotions into the narrative.

2. The story also revolves around a boy who is realizing his sexuality and struggling to accept it because being gay was actually illegal at the time. What drew you to telling this story set in that period of time? Did you always set out to tell this narrative in the 70s as opposed to the present day?
I was first inspired to write this story after a friend of mine brought me an episode of This American Life titled “81 Words.” In it, the narrator talks about the time when her grandfather, Dr. John Spiegel, was one of the psychiatrists with the APA who helped remove homosexuality from the DSM (The Diagnostic Statistical Manual, which is also known as the Big Book of Mental Illnesses). Suddenly anyone who identified on the LGBTQ+ spectrum was cured. It’s a dramatic account of that time, and it’s an integral part of our history I knew nothing about. In fact, after listening to that episode, I realized how little I know about our queer history and how rarely, if at all, it’s taught. I wanted to change that for myself and help educate readers about the importance of this time as well as the enormous contributions LGBTQ+ peoples have made throughout history. And since homosexuality was officially “declassified” as a mental illness on December 15, 1973, I knew I wanted to set the narrative a few months prior to that decision.

3. Your writing style heavily influences the tone and feeling of the book and gives the story an extra dimension. Does voice come naturally to you or have you developed it over a long period of time? Do you have any advice for beginning writers looking to cultivate their voice?

Thank you! Honestly, I think I’m still finding my voice as an author, but for this particular story, Jonathan’s was discovered as I started writing the first draft. His escape into music, where he feels most safe in the world, helped me find a lyricism to his voice that I felt was integral to understanding his state-of-mind. I wanted the reader to be immersed in the story, to fully experience and feel his journey, rather than just read about it.
“Finding your voice” is such an abstract concept, one that can be challenging to know how to address in concrete terms. My advice for any writer in honing your voice is two-fold: 1- Write, write, and write some more. It took me well over 100 drafts before I felt secure in Jonathan’s voice, until it felt as natural to me as if I were having a conversation with my best friend. To me, that’s the key. In my opinion, you have to know every single piece of your character’s backstory (I’m obsessive and literally have four spiral notebooks filled with backstory about Jonathan) in order to authentically and creatively write their story.
My voice is ever-evolving, as I think it should always be.  And this brings me to the second piece of advice: You have to know yourself first before you can ever begin to know someone else. You have a unique set of gifts to give to the world. When you own those gifts, when you find strength because of those gifts, I think you’re that much more in tune with your authentic self, and living from that place will lend itself naturally to discovering your “Writer’s Voice.”

4. In your bio it mentions that you spent a decade touring the world in a play for a decade. How has touring and getting to visit so many places impacted your writing
Touring with Terrence McNally’s play Corpus Christi for a decade changed my life dramatically. In short, the play is the story of Jesus—from nativity to crucifixion—told through the lens of a young, gay man growing up in 1950s Corpus Christi, Texas. What the play did, that surpassed all our dreams and expectations, was bring LGBTQ+ peoples back to a faith they’d been ousted from because of their identity; they were seeing a story they grew up learning told to them through their lens. Lives were being changed and healed, including the cast, because of the power of this piece. Not only did I experience first-hand the transformative gifts of art-making, I was able to more deeply understand the intersectionality of my LGBTQ+ family. These two learned lessons deeply influenced my journey into writing.

5. I always love to hear about what debut authors want to do next. Can you share about any upcoming projects?

Well, after the dust settles a bit on this debut journey, I want to get back in the kitchen and start cooking again. I love baking and entertaining, and with the holidays approaching I’m so excited to start hosting some parties at our house. As far as book stuff, I can share that my next two books will each dive into another lost or forgotten moment in LGBTQ+ history. Since I’ve been on tour, I’ve witnessed a voracious appetite in people of all ages to learn more about our history, and although it’s currently required to be taught in only four US states, I look forward to seeing those numbers increase over the next few years as these books release.