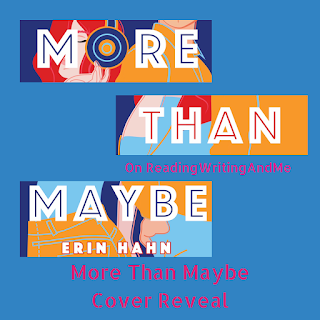 Today is a very special post because I get to show you all a first glimpse at More Than Maybe, Erin Hahn's sophomore novel. I've been excited about this book since I finished You'd Be Mine, and I'm so happy to finally be able to see the cover and learn a little more about Luke and Vada. Before I get to telling you about MTM and showing off the cover, I just wanted to talk a little bit about how I first found and fell for Erin's work. I randomly stumbled upon You'd Be Mine on Netgalley and decided to give it a try, and from the second I read the first page and heard Clay's voice so clearly in my head, I was hooked. After I finished reading, I wanted to know more about the book, the characters, and how the story came to be, so I reached out to Erin, and she was sweet enough to agree to do an interview. I know I'm not supposed to pick favorites, but her thoughtful answers and complete sincerity makes my interview with her one of my favorites of them all. If you're curious about it, you can read it here. Her voice and her empathy is her undeniable strength, and, having read the More Than Maybe excerpt, I'm confident that it'll be found throughout all of her future stories.

I've spent most of this year talking about You'd Be Mine on social media, turning it face out at every bookstore I've visited, and recommending it to everyone who will listen. Erin's stories always combine two of my favorite things, amazing storytelling and amazing music. Though More Than Maybe moves away from the country genre, music is still at its heart. Erin told me that there's around one hundred songs referenced over the course of the book.
We thought it would be fun to share some key pieces of Vada and Luke with you along with what song they'd be jamming to right now.

Vada Carsewell is an eighteen year old music blogger, a high school senior, and a bartender with an ear for talent and big plans for her future. She'd be listening to "Mess Her Up" by Amy Shark.
Luke Greenly is an eighteen year old closet songwriter, introvert, cupcake, skater, and locally famous (soon to be internet famous) podcaster. He'd be listening to "I'm ok" by Judah and the Lion.

When I read these introductions for the first time, I did a happy dance in my seat because, as a blogger, podcaster, and music lover, I can already see glimpses of the things I'm going to fall in love with about these characters. Also, Vada has impeccable taste in music!

Now for the more official stuff you've all been waiting for. To find all the preorder links and some awesome blurbs, please follow this link: https://read.macmillan.com/lp/more-than-maybe/. Down below, you'll find an excerpt to get you hooked on the book and the long awaited cover! Let me know in the comments if you're already in love with Luke Greenly by the time you're done reading this snippet: 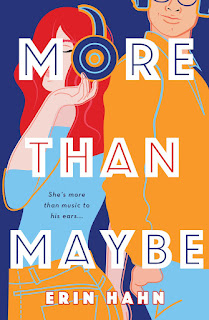 So I hope you had tons of fun getting to learn more about Luke,Vada, and Erin's new book! Now we all have some new things to discuss until we get to read it all spring of 2020...