Let's Call It A Doomsday Review 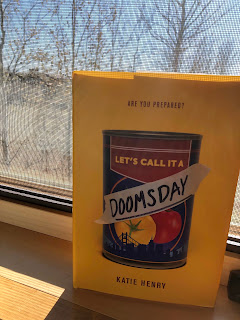 Let's Call It a Doomsday by Katie Henry
Overview: Ellis is ready for the world to end a moments notice. She's not sure when that will be, but she's a prepper. She has all the supplies for any disaster that might happen. She's also paranoid by small disasters. She's anxious all the time. Her inner voice is mean, and her family doesn't understand her anxieties. Ellis feels alone. And then she meets Hannah, first awkwardly in her therapist's office and then in the school library. Hannah claims she's been getting dreams about when the world is going to end. A blizzard is coming to destroy San Fransisco. It's exactly the information Ellis always needed. She can save everyone now, or at least try to. The issue is, no one believes Ellis, and she has no proof Hannah has the abilities that she claims. Will Ellis figure out what's really going on before it truly becomes a life or death situation. Overall: 5

Characters: 5 I loved Ellis. On the surface, we're nothing alike. While the opening page discussing the Yellowstone Caldera (which I happen to live on top of) sent a tingle of nerves down my back, I generally ignore the whole apocalypse thing. I'm also not a Mormon which is a huge part of Ellis's identity. Where we intersect is all the wonderful tiny moments that Henry builds in to create characterization. We have the same sense of humor and sarcasm. Also, our minor anxieties and inner voices share many similar patterns. It was a story that felt completely removed from me that still made me feel so seen which I loved.
As far as minor characters, there's Hannah who is presented as a sort of prophetic character, but, logically, we're reading a contemporary YA book, there's no way the world is really ending at the end. She desperately wants to find Prophet Dan to interpret her dreams, which she seems to care more about than the fact that the world will be over in a few months. Her character is vague and mysterious, but the reader is given a lot of room to realize and understand Hannah aside from what Ellis puts on her because she wants to believe she might have some control.
Hannah's friends Sam, Theo, and Tal play important roles too. They're stoner kids who couldn't be more different from her traditional Mormon lifestyle, but they become an amazing support system. Her relationship with Tal is one of my favorite parts of the book. He's an ex-Mormon that makes her think a lot about her faith without abandoning it or only following his line of thinking. He never pushes any of his beliefs on her and he doesn't know what he really believes himself. The most important part of their relationship, though, is that they're both bi. Or, well, Tal is, and Ellis isn't sure if that's the label she wants yet but thinks it feels closest to right at the moment. I love how she wrote and explored this relationship and their sexualities and how they impact each other.
I know I've said a lot here, but the last thing I want to hit on is Ellis and her mom who plays a pretty big role in the story. You can tell there's so much love there, but her mom really doesn't understand her anxieties and feels like a failed parent because she doesn't know how to help. This manifests in a lot of criticism and anger towards Ellis even though its misdirected. I thought that this parent relationship was so important to include because it's quite dynamic in the book and I think a lot of teens with mental health will be able to relate to a lot of these moments.

Plot: 5 For not actually including an apocalypse, this book will keep you on your toes and has quite a bit of action. Even though you as the reader know that the world isn't ending in December in the book, Henry manages to keep you fully hooked into Ellis's rises and falls. There's also incredible character development throughout that makes the external conflict so much better and more impactful. I like how towards the middle and end of the book, Ellis really has to confront her old beliefs against what she's come to learn and reconcile how they can exist together. This happens on a number of fronts all at once, but her threads are quite well managed.

Writing: 5 I LOVE Henry's writing. I was a huge fan of her last book, and that voice that I enjoyed so much carried through here. She tackles some really serious topics in an effortless way that is both quite reverent to the seriousness and extremely funny. In both of her books, she tackles the idea of religion and what it means as a young adult where you're questioning so many aspects of your identity. While this book comes at it from a very different angle, it's still a perfect execution and so rare for YA. Also, the way that she portrays anxiety in this book is one of the best I've seen. I'm still impressed at how cleanly she crafts an entire world together and gives us glimpses at every part of it.


Other Books By This Author...
Heretics Anonymous: Review Here
Into YA with Katy Henry: Here