Every Other Weekend Review 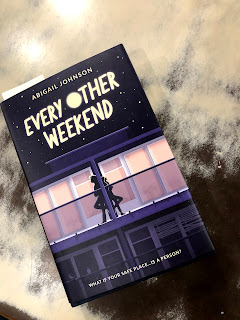 Every Other Weekend by Abigail Johnson
Overview: Adam and Jolene are both stuck at their dad's apartments every other weekend and neither of them are happy about it. That is, until they meet one another. They learn to get through the worst times of their lives together, and, soon, they don't dread the mandatory visits. While they fall for each other fast, it takes a long time for them to admit it. Overall: 3

Characters: 3 The book is split POVs between Adam and Jolene. Adam is very passive. He cares too much about how everyone else is feeling so he doesn't process his own feelings very well. He fades into the background, and that's okay. Jolene is loud and brash and sometimes flat out mean. She appeals to Adam because she feels fresh and different. Jolene walks a fine line between a character with a singular personality trait and being a manic pixie dream girl. I think I land more on the one note side, though, because that's the problem with most of this book. Adam, Jolene, their parents and siblings, all have one thing. One thing they care about. One pattern of behavior. There's very little in the way of dynamics which makes it hard to care for these characters a ton. I like Jolene enough. She says some sarcastic things sometimes that are amusing, but I wish that she was more than a just "quirky". Her relationship with Adam is the same way from start to finish too. They both instantly like each other. They instantly act like boyfriend and girlfriend so their lack of actual commitment doesn't mean a ton to me which makes it hard for their romantic relationship to be super interesting as the plot carries on.
Also, the dynamics with their parents are central to the story, but they are all so flat it's hard to care. Adam's mom is too embroiled in grief to really care about anyone else or function. Yes, many people are paralyzed by their grief, but this could have had so much more nuance. She was basically portrayed as worthless and in need of Adam's constant care. Jeremy, his brother, only wants to defend their dad. It's all he ever does with very little logic. Adam's dad tries, but Adam is super cold to him over breaking up the family. On Jolene's side, her dad is missing 24/7 and her mom is too deranged to be believable. The singular motivations paired with single personality traits makes it super hard to create any investment with the characters or put much stock in what happens to them because everything is taken to soap opera levels without the juiciness.

Plot: 3 The book is like 500 pages where almost nothing happens. Obviously, to have a plot really work in contemporary, you need to be able to have really dynamic character relationships to rest your plot threads on, and that's where this stumbles. They spend tons of time just sitting together or having the same fight with their parents, but the emotional stakes are just lacking.
Also, in the last 100 or 50 pages Jolene faces a sexual assault issue that feels super rushed and sloppily written and just used as a plot point, which I hate. Those stories are so important, but they shouldn't be tacked on to the end to extend your book when it doesn't fit in with anything else that happened throughout the story. It felt like a device over something genuine to the story, and I find that almost offensive. I wish that had just been skipped if it couldn't be handled properly.

Writing: 3 The book was fine enough when I picked it up. Jolene is entertaining enough for maybe 200 or 300 pages. I read the first 200 pages in one sitting and got to around 300 before I just wanted to completely quit. It made me start questioning what the point even was. 500 pages is pushing it for fantasy in my book, so 500 pages of people sitting around without any emotional stakes, it's hard to stay interested. They do a ton of things over and over again without building on their arcs and the plot. I love books where nothing happens, but I just need more to be there in the details. I also need it to be shorter and much more internally focused where characters really mine their feelings. Something more like We Are Okay. This book just didn't seem like it had enough time to be mulled over and developed properly before it was published. I probably would've given it an extra star if it had been 300 pages. Everything that made me really done or upset with it happened well after it could've been satisfyingly wrapped.

On The Podcast:
Diving Into Halsey's Manic
Music Musings and Me

Links of Interest:
Into YA with Emma Lord
New Year New Blog Goals
I Got Rid of (Almost) All My Books
Reflecting on 2019