I Got Rid of (Almost) All My Books 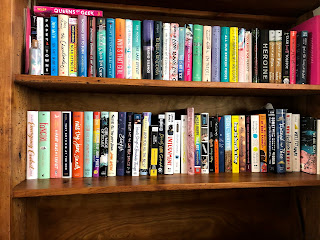 On Twitter, everyone loves to joke about their TBR piles that are heading to swallow them whole. We talk about buying way too many books. They're like personality traits for book bloggers and book community members, but we don't really talk about the reality of that. Running the blog for close to three years, it was starting to stare me in the face in the form of heaps and heaps of books. Books everywhere. Shoved onto my tiny bookshelf, stacked on top of it, piled on my nightstand, piled on the floor, and lining my long windowsill. I woke up one morning and decided it felt like the books were slowly creeping in and stealing all the oxygen. So I decided to do something about it. I gathered together all the boxes floating around in the garage from Christmas, threw myself on the floor, and started to make piles of my books.
It was honestly overwhelming to start deciding what I was giving away and what I was keeping. I was both feeling like "EVERYTHING MUST GO" and "how could I part with any of these. They're my babies". So I started making two piles to generally start dividing out the books. There were some books that generally just made me feel guilty about owning them. The books I was once so excited
for and quit part way through or just never got to for some reason before my tastes changed. If it made me feel bad at all, it was going. Then I sorted through books I had bookmarks shoved in that I'd abandoned for one reason or another. I gave most of those away because I DNF'd them at the time for one reason or another. I also gave myself permission to pass along books I'd never even opened cause I'd lost interest in the genre or story before I got to it. I'd rather it go to a home that would appreciate it than languish on my shelf cause I'll pick everything up before it. I only kept a couple of them that I still had a genuine interest in.
The hardest part, though, was narrowing down books I already owned. Over the years, I'd collected a lot of books, mostly from blogging. When I got my bookstore job, I finally had a lot more money of my own and was constantly around books to buy, so I went a little overboard. It's easier to do bookstagram if you own quite a few books because they photograph better than Kindle or plastic wrapped library books, it's easier to pull old books you'd read for stack pictures, and it's the easiest way to get your hands on new releases ASAP, which is honestly so important for growing a platform. Also, during that time, I started getting more and more ARCs, both solicited and unsolicited. I got one in the mail this morning, actually. So you can see how that stacks up too. I also had a lot of books I'd bought at book festivals so that I could stand in signing lines and briefly chat with authors I'd admired. Those were so hard to decide on what to do because they were signed to me and many of them had very sweet messages. I felt awkward giving them away because they felt so personal, but a lot of them were books I just felt so-so about. 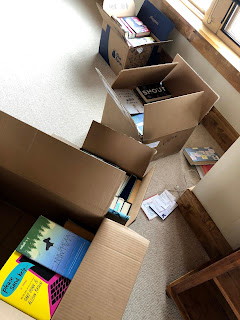 This was where I started falling back on Marie Kondo's tried and true method of "Does it spark joy?" And I realized a lot of them just didn't. Giving a book away didn't mean I didn't like it or that it was bad. It just meant that I'd read it and now wanted to give others the chance to read and enjoy it. After all, I'm passing them along to other girls who love to read, so why would I want to give her only the books I rejected. So I gave away tons of books I never thought I'd part with.
There was one shelf, though, that I didn't touch. The top shelf of my bookshelf is where I put all the books that I have fallen in love with and really personally connected with me. I only wanted to keep the books that I still thought about months or years later, the books that made me cry, the books that made me feel seen like nothing else had. They were books that I'd consider rereading sometime in the future even though I'm not a rereads, and they're the books that I want to pass around to others so they can share my excitement. And I kept some of them for the memories associated and the words written in them. I kept my copy of They Both Die in the End that I got at a book signing in New York and Adam Silvera wrote a super supportive note in. I have some signed books with wonderful notes in books that I feel deeply about that I've gotten from authors I've had the chance to work with. There's a reason that I gave away five boxes of books yet still have two copies of You'd Be Mine plopped on my shelf.
Now, my bookshelf is full of books that mean the world to me and remind me of what I've managed to achieve in the book community and with the blog instead of the things I missed. So if you've been thinking about doing a shelf clean out, go for it. If you want a clean slate with your TBR, don't hesitate to let some books go, regardless of how you felt about them when they came into your possession.
As a final thought, I want to talk about how this shelf clean out has reset how I'm looking at consuming books and gathering reading material in the future. Being a book blogger is hard if you don't buy books. It's a hobby that requires a lot of privilege both time-wise and monetarily since it doesn't come with any compensation and requires you to buy a lot of books to keep up with what's hot. There's ways to work around it, though, and, if you want to be a book blogger, you shouldn't let that dissuade you. To prove that point, I'm going to go back to how I began with the blog- getting books from the library. I'm lucky to live in a town that has a really well curated library which gives me the opportunity to do that. It means I won't be super on top of new releases, but I don't really care about that anymore. In a later post coming out soon, I'm going to be talking more about the next chapter of the blog, but the library will be a big part of that. It suits how I read. I consume books once and don't really think about going back to them. I'm hoping to get most of my books on loan or through the library both to save money and space with college in mind. I'm about to move out and stare down a lengthy future of cramped dorms and apartments which doesn't leave much room for books. I'm going to try to start reading books I do buy on Kindle more too. I don't love the Kindle, but they don't take up space and are easier to travel with. They also don't require any shipping which helps the environment in a small way. The idea that I won't buy any physical books isn't realistic (I've bought two and its been a week so...), but I want to focus on intentions over being perfect. I want to consider every book I buy and why I can't get it in another way. I want to limit those purchases and also make sure I only buy one at a time so that nothing gets shoved on an endless TBR pile. I want to be able to read it immediately while I'm still enthusiastic and excited about it. Anyway, those are my thoughts on new years clean outs, my book buying plans for 2020, and my outlook on that right now. Is your TBR pile overflowing? Did you recently do a shelf clean out? Let me know in the comments what your book buying plan is.