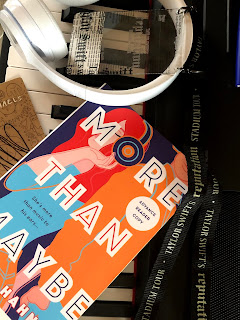 More Than Maybe by Erin Hahn (May 2020)
Overview: Vada works at a dive bar, scraping together money for college and learning about running from a show her soon to be step-dad to get closer to her future dreams. She also runs the Loud Lizard's successful music blog Behind the Music. Vada is about to head off to LA and start working towards her music journalism dreams, but she has to make it through senior year first. Luke Greenly is the son of famous British punk rocker, Charlie Greenly. The whole family has set down roots in Michigan where his mom works at the university, but remnants of his dad's past life still follow them. Luke loves writing songs but hates performing, and, because of his dad, he's been thrust into the spotlight more than he'd like. For now, he'd rather stick to making successful podcast The Grass Is Greenly with his twin brother, Cullen, and hopelessly pining after Vada through stalking Behind the Music. Overall: 5

Characters: 5 Vada is a character I related to a lot while also being a character I wanted to be. She's amazingly driven, takes things head on, and refuses to compromise the things she loves for anything. When she's not working or at a show or writing about one, she's in her senior year creative movement class expressing herself through her long lost passion for dance. Vada is sweet, strong, thoughtful, and incredibly in tune with herself which she needs to navigate her difficult family situation. The book weaves Luke and Vada's love story through her family troubles with her biological father who sometimes seems like he forgets she exists until he needs babysitting. Because of this, the book places an incredibly strong emphasis on the power of found family, which I love.
Luke has always been a prodigy. Even though Cullen got the magnetic personality, Luke has a gift for music that he's kept hidden since being paraded to labels and hitmakers when he was younger. He's always felt like he lived in Cullen's shadow until he meets Vada and starts to carve out his own niche in the world finding understanding and love in a gross dive bar. It's amazing to see the connection and genuine friendship that binds Luke and Vada beyond any romantic feelings that are at play too. Though they have their problems like any relationship, Luke and Vada ground each other in the face of the individually intense situations that are thrown at them over the course of the story.
As a side note, even though Luke and Vada are our main characters and our point of view characters, we get an incredible amount of development from every secondary character we hear from. Cullen and Zack, Cullen's boyfriend and Luke's best friend, are major players we get to know quite well. There's also a large emphasis placed on all the adults involved. Luke's parents paint blurry figures teetering between protagonist and antagonist roles but ultimately proving they're just like any parents who love their kids. More complexly, there's Marcus, basically Vada's deadbeat dad, who's thrown in sharp contrast by Vada's mom and her boyfriend, Phil. Even Marcus's new wife, for the few moments she appears, is painted in a complex and compelling light. For a genre that usually shies away from including parents, Hahn's book shines for its willingness to confront those intricacies and explore when family is worth fighting for and when it's time to let it go.

Plot: 5 This is my favorite kind of contemporary story because, while there are plenty of challenges, this is a book that courses on emotion. Nearly every conflict, even when it seems presented externally, ties heavily back to some kind of relationship bond in the story and pulls on it to get varied reactions. I think that's what a lot of books miss. There's twists and turns that the characters have to confront, but they don't pull at any part of their core beings. You keep reading because you're in love with Luke and Vada and you're waiting for their next text exchange of music or you're pulling for a dingy dive bar you've somehow fallen in love with because of its close ties to these characters.

Writing: 5 This is my favorite part of the book. Every line has a pulse that's tied back to the music that is inextricably woven through the fabric of the story. From songs on the recent radio to throwbacks to musicians my mom introduced me to to some I'd never heard of and gamely looked up, the music references abound in the story. It gives it such a firm vibe and sense of place that grounds the story in an incredible way. From Luke and Vada expressing themselves by sending YouTube videos of songs to Vada describing a scene with a "Sk8ter Boi" reference, there are easter eggs sound every corner. Hahn does a stunning job of proving music's power when words fail by only printing letters onto a sheet of paper.
More than anything, the world just feels incredibly full, realistic, and fleshed out. There's not a scene or a character that was left half-baked at good enough. If they're mentioned by name, they're layered with a compelling story and unique point of view which is an amazing feat and not one accomplished often. Luke and Vada will forever be in my heart.
If you enjoyed the book (or my review) and you want more More Than Maybe content, check out my YouTube video on the book where I made a custom playlist based on the book:

Other Books By This Author...
You'd Be Mine: Review Here
Interview with Erin Hahn: Here
Cover Reveal More Than Maybe: Here