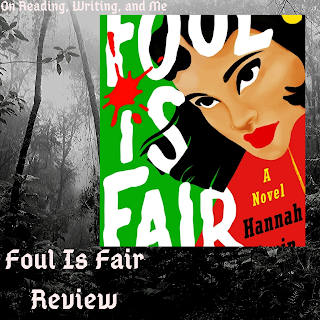 Foul is Fair by Hannah Capin
TW: Sexual Assault
Overview: Elle walks into a party with her squad. She walks out a new person. She cuts her hair and dyes it black, she changes her name, and she makes her friends swear to help her get revenge. Now named Jade, she transfers to St. Andrews Prep to stalk and systematically take down each of the lacrosse boys who drugged and took advantage of her at that party. She will make them destroy themselves and then escape with her hands clean. She knows just how to play all the boys against one another and exploit their weaknesses to destroy their hierarchy. Overall: 4

Characters: 3.5 The book is hard to break down and discuss because the style it's written in is very specific. I have a hard time figuring out the core of all of these characters because of it. The tone fits the story, but it also positions the reader very far away from all of the characters which makes it hard to see past their exterior. Jade is cold and calculating and feels like a complete ice princess. She's in a very understandable state of shock after what happens to her, but the way that she's immediately so focused on revenge and doesn't show much emotion at all makes it hard to connect with her. She is also very focused on herself and her plot which makes it difficult to really understand any of the other characters. There are some good hints through the actions Jade notices because she's very observant, but it doesn't hit the same way with the distance. They all feel more like paintings than people.

Plot: 3.5 The whole book is centered on revenge and the revenge plot. She works to slowly feed off the boy's powerful ego issues to turn the lacrosse team against each other. It's very calculated, but a lot of the meticulous planning slows the plot down. There's a lot of details and bits and pieces that sort of bogs down a lot of the action. My other issue is that it feels like some pieces are missing from scenes or is too deeply buried in subtext to fully understand what's going on.

Writing: 4 This is an interesting concept book. I think that's where it shines the most. It's written in a style that is very icy and removed from the main character which I think was the point. Jade went through an extremely traumatic experience and one of the most common reactions is to shut down and shut out so I completely agree with bringing the character in that direction. It just creates certain complications in revealing other aspects and nuances of the story. There are parts that are very poetic and there is a lot of showing that I appreciated and quick cut scenes, but I feel like stories also need to be told and that's what was missing here.
There also seems to be a real layer of fantasy here because a lot of the events don't seem plausible at all. Like fantasy under the guise of a contemporary world.


Other Books By This Author...
Dead Queen's Club: Review Here