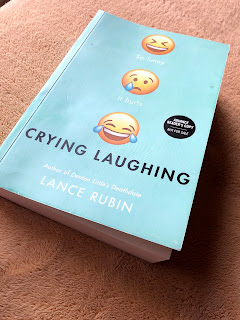 Crying Laughing by Lance Rubin
Overview: Winnie's life exists for laughs. Her dad is a former wannabe comedian, so he's never quit making jokes around the house. They're super close as he quit his career to stay home with her. She's taken on his love for comedy and has tried stand up, but she's never going back to that again. Now she's in the school's improv troupe, trying her hand at another form of comedy. She forms a closer group of friends and meets new people form it. It's also a good distraction from her dad's increasing health issues as he drops new things and starts falling. As her dad comes to terms with his ALS diagnosis, Winnie doesn't know how to respond to a world that's both full of joy and sadness. Overall: 4.5

Characters: 4 Winnie is super sweet and very interesting. She wants to be funny so badly. Sometimes, she succeeds and is very funny, but sometimes she falls flat on her face. She knows that every joke doesn't work, but, much like her dad, her self esteem rides on her being seen as funny.
Filling out the cast, her two best friends Lili and Asmaa are there to support her through her hard times, but they also open her eyes to the fact that the world is much larger than the parts you interact with.
The rest of the improv troupe offers a cast of characters for Winnie to further interact with and learn about herself and some of her internalized biases. I love how Winnie is a character so open to change and confronting her beliefs even when it's hard.
There's also great parental relationships in the book. Winnie is best friends with her dad, but between his health problems and other issues that come to light, she has to reconcile a lot of devastating information against her glowing picture of her father. She also has to face the idea of loosing her father slowly. Because of the nature of his disease, she doesn't know how long she has left with him or how long he'll be able to function without assistance. Her normal life crumbles, but it does leave room for her to become closer to her mom and understand her better. I've never read a book that so honestly confronts the moments in your teens where you start seeing your parents as complete humans and you start learning about their flaws and pasts. It's quite interesting to see reflected and is a common experience that never really gets touched on in YA.

Plot: 4.5 The plot in the book bounces back and forth between the improv troupe and Winnie's home life, and I like that we get to see them in equal parts. A lot of the lessons she learns and things she realizes at in both places end up getting reflected back in new ways in the other. It allows us to see a lot of growth in Winnie's character, proving not only that she could understand in the moment but that she could apply that to her life.
This might be a bit of a spoiler, so stop reading if you'd like, but I think it's pretty apparent from the start: The main romance that we see throughout the book is between Winnie and one of the guys in the improv troupe named Evan. It's pretty clear, though, that Evan is more interested in Winnie than she ever is in him. The whole reverse pining thing so sort of fascinating because that doesn't really happen in YA. She goes out with him but sort of passively, and she likes him because he boosts her ego at the beginning. He thinks she's funny. As you read the book, you can sort of see a foil of this in what we learn about her parent's relationship in the past, and I find the mirroring technique pretty genius in bringing some of the themes full circle.

Writing: 5 I've read all of Lance's books, and I'm always excited to see a new one because I simply like the way he writes. Whenever I pick up one of his books, regardless of whether I know what it's about, I know it'll have an undercurrent of humor. It's amazing how he's able to balance tone so well, keeping the book feeling light and fun to read while tackling some really weighty topics with complete respect. It's a voice that will grab you, and it makes him the perfect author to pick up when you're in a reading slump. The wit is amazing, and I'm still in awe of how dynamic and all encompassing this book is. There's a family story, a dissection of high school romance, and a friendship story baked into one cleanly executed book.


Other Books By This Author...
Denton Little's Death Date:Review Here