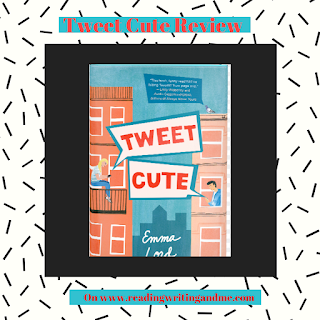 Tweet Cute by Emma Lord
Overview: We all know that Twitter is the home of sarcasm and great debates. Recently, though, fast food companies, sports teams, and more businesses have found social media managers that have taken their jobs to the next level creating infamously shady tweets. Two people contributing to that world are seniors at a fancy New York City private school. Pepper and Jack are engaged in an all out war when Pepper's Mom's company, Big League Burger, apparently rips off Jack's family's prized grilled cheese recipe from their deli, Girl Cheesing. While Twitter originally is the host that allows the tiny deli to call out plagiarism and win back major support, it becomes the canvas for some serious feuding while also making the undeniable chemistry between the two incredibly apparent. Tweet Cute is about our internet world, and, instead of spelling out our doom from it, Emma Lord manages to reveal all its beautiful nooks and crannies. Overall: 5

Characters: 5 Pepper and Jack are compulsively likable. Pepper is a bit uptight, and definitely appears that way from the outside, but she also has a goofy side that makes more than a few appearances. She loves to bake and runs a baking blog with her sister, she's incredibly quick witted, and her view of the world feels refreshing. But she's also lost. Even though she's winning school, she doesn't know what her real goals in life are beyond what other people have outlined for her. She also can't find her footing with her family. Her sister has a deep rift with her mom after her parent's divorce, and, even though Pepper doesn't agree with all of her mom's choices, she feels compelled to offer all of her support.
That's why Jack is such a welcome relief in Pepper's life. Despite being the adversary, Jack is fighting the battle right along with Pepper. It's not surprising, given his similar feelings of being lost and weary of the family business, that they wind up discussing strategy and making a game out of their online feud. Jack is the sweet and nervous side to Pepper's exterior bravado as he's always lived in his class president twin's shadow, and they balance each other perfectly.
There are also tons of great minor characters that bring up reflections on how schools pit students against each other with their flawed teaching methods, what it means to have real friends, and what it means to be the sibling that isn't always the center of attention. They're all story threads that could be explored in an entire book but create the perfect compliments to Emma's story here without overwhelming it.

Plot: 5 Writing a book about the internet could be a disaster. I've never actually seen it done spectacularly, but this book is the exception. It's current and completely of the moment without dating itself. It sounds just like my friends and I do without being dumbed down or twisted into a Frankenstein of what adults think they're like. It's a book that feels completely my generation. That completely understands Twitter and that gets and wants to glorify the positive sides of the social internet. There are so many books that want to take on its dark side, its danger, and cyberbullying, which exists, but, in my opinion, isn't most of what the internet is or does.
I think my favorite part of the book is the side current that runs through the story that is the Weazl app. Weazl is an online chat app only for people at the high school Jack and Pepper attend. Jack actually created the app and he monitors it. Everyone on it is anonymous, named after a randomly assigned animal, but the app isn't rampantly abused. Kids use it to form study groups and offer homework help. Other students have found best friends and boyfriends/girlfriends from it. We see Bluebird and Wolf find solace in finding each other and being able to be completely open and honest to somebody else because they feel protected by the anonymity. Two strangers become the most important support systems to each other. Despite it being a generally positive place, the principal is intent on getting it shut down. I think this is an important element too because I feel like a lot of the internet is looked at by people from older generations as completely foreign and therefore intimidating and so it must be bad without taking a second to try to understand. I loved the way all of that was examined in the story as well as other nods to Internet culture and things like fan fiction.

Writing: 5 Emma is a spectacular writer. There were times where every word felt so perfectly and expertly placed that they seemed to glitter off the page. This is book that has had tons of time and effort invested into it, but it's not overworked. The sarcasm and jokes hit perfectly. The emotional pitch is tightly controlled yet versatile. The story runs a satisfying arc with lots of tropes that are so well done they seem original to this book while still confronting tons of major issues in society today. The whole book is a delicate balancing act that stays completely on point the whole time. This is just another example of Wednesday continuing to put out a selection of YA that pushes the genre in new directions and with fresh themes that need to be confronted and examined with today's teen's. I can't wait till everyone gets a chance to read this!


If You Liked This Book:
You Asked For Perfect: Review Here
Eliza and Her Monster: Review Here

Into YA with Ronni Davis: Here
When the Stars Lead To You: Review Here
Looking For Alaska on Hulu: Here
Into YA with James Brandon: Here
New Release Wednesday Reading Spotlight New Releases Weekly Reviews and Recommendations

My Year of Rest and Relaxation  by Ottessa Moshfegh TW: drug use, mentions of suicide/self harm, bulimia Overview: While we don't know the protagonist's name, nothing in her inner world is off limits as Moshfegh probes through the life of a grief stricken, isolated young woman in New York City at the end of the year 2000. After graduating from Columbia, the protagonist wanders through life halfheartedly working in an art gallery, seeing a man who is generally disinterested in her, and only offered companionship by a best friend she hardly likes. As her life slowly spirals downwards, she starts coasting on her inheritance from her parents' estate and decides to employ a psychiatrist with shaky morals to give her enough drugs to sleep through the next year of her life. Maybe if she can finally, truly rest, she'll be able to recalibrate her life on the other side into something far better than the current drudgery. Overall: 3.5 Characters: 4 The main character is classical
Read more