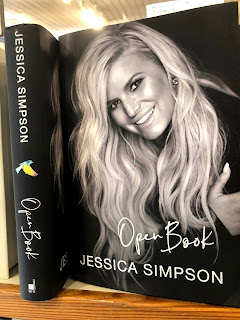 Open Book by Jessica Simpson
TW for the book: Sexual assault, Discussions of Body Image/Restriction
Overall: 3.5
Thoughts: I'm just going to put it out there before I start that I am not the target audience for the book. I was just over a month old when Newlyweds hit the airwaves. I only really knew Jessica's name. I vaguely knew she sang and had recently found out she had a reality show. While those who had come up in the industry around her are still more forward to the pop culture epicenter like Christina Aguilera, Brittany Spears, or Justin Timberlake, Jessica has moved her focus to her fashion lines and priorities that took her out of the spotlight. I think that made going into her book even more interesting because I had no expectations. My mom already knew a lot of the information I shared from reading, so the book might be more illuminating for people who don't know much about her, but she seems to share quite a bit of new information.
Content wise, I thought the book offered plenty of antidotes and discussions to keep the story moving, but the writing had less confidence. As far as I can tell, it was simply Jessica and her editors working on the book, which I applaud her for, but it also means there's a great deal of uncertainty in the writing at the start. It makes sense as she's never written a book before, but some of the awkward sentences and set ups made me a bit nervous that I'd made a mistake by grabbing the book. I gave it more of a chance than I usually would because it was an audiobook and I was stuck on a plane with nothing better to do. I'm glad I stuck it out. Just as her narration starts to flow and get stronger as she continues telling her story, the awkward syntax and the uncertainty started to fade. Through offering difficult stories and events in her childhood, her issues with finding a label, and her first marriage with Nick Lachey, the descriptions get vivid and engrossing. Her candor amazed me, and her intense honesty does deserve the commendations the book has gotten.
At over four hundred pages, I do think the book was too long, and everyone should know that it's the narrative you have to be there for over the writing or quality of storytelling itself, but I think if you're a music fan, pop culture fan, or a Jessica Simpson fan, you'll definitely find at least some of the chapters insightful and rewarding.