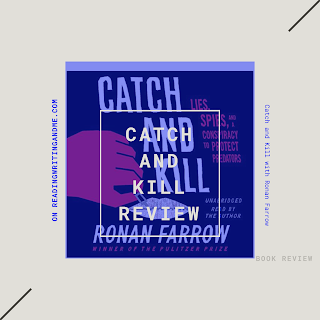 Catch and Kill  by Ronan Farrow
TW: Descriptions of sexual abuse
Overall: 5
Thoughts: Before I start on my thoughts on the book, I do want to note that I listened to this on audio and Ronan does a great job reading it. With the book reaching almost 500 pages, I would highly suggest you look into the audiobook as it makes you just want to keep reading it. Also, if you love podcasts, this is read and produced in a very similar way which I really enjoyed.
Anyway, on to the book. Previously, I read She Said which was the book published by the women at the Times who first broke the Weinstein story which I found a great complement to this book. Ronan offers another side to that story as he worked on the reporting around the same time. While She Said had a major focus on producing their specific article and diving into the women who were coming forward with allegations along with their mental process to coming forward, Ronan picks up on threads that were hinted at in She Said and goes deeper. Black Cube was mention in the women's book, but it wasn't the focus. Here, Weinstein's group of agents constituted its own plot thread as they seemed to impact and interfere with Ronan's life to a greater degree. Ronan also tells the Weinstein's story with a broader angle also including allegations against other top executives and personalities who all had hands in controlling the reporting of his story and the domino effect from Weinstein's story finally being allowed to break. This book tells it with more of a focus on NBC's reaction to his increasing amount of evidence against Weinstein and their ensuing suppression of the story that originally confused Farrow. As he continued, though, he found a far messier web of suppression and ties to Weinstein between the higher ups. And I think that's where the most striking part of the story comes from. Spanning between NBC executives, Trump, Weinstein, Epstein, CBS executives and Fox executives, along with on-air personalities, there was a shocking amount of overlaps that allowed the suppression to be facilitated. Executives didn't want to break stories too close to allegations they were suppressing themselves. They were tied together like a Jenga tower, and one finally falling exposed a true mess.
Farrow explains these complex connections and the events that led to their exposure with great clarity. He keeps multiple plot threads held tight as he discussed the simultaneous happenings. It's an expertly written book and worth reading for the storytelling alone. The information and awareness is also expressly important. We learn an immense amount about the roadblocks that can come with reporting and how the news we get isn't necessarily the full truth. It's what's approved or views as most palatable. It was stunning how few people were willing to speak up against skewed reporting or ending an obviously important story. It makes more sense as he runs through the ruined careers of those who did bring either questions or accounts of abuse to higher-ups.
The book is a shock and a wake up call, and I think Farrow communicates it in a fascinating, human way that makes the immense amount of information easy to digest. While it was forced to close on deeply uncertain terms, it does offer hope in the promise that we're only becoming more aware of the problems that certain industries need to address. I never wanted to put it down and finished it in close to one sitting.
I also highly recommend you read She Said and Catch and Kill back to back to get the fullest portrait available.

Links of Interest:
The Gravity of Us Review
On Audiobooks
Layoverland
Into YA with Hannah Capin
Spotlight New Releases Standout Book Weekly Reviews and Recommendations