Into YA with Hannah Capin 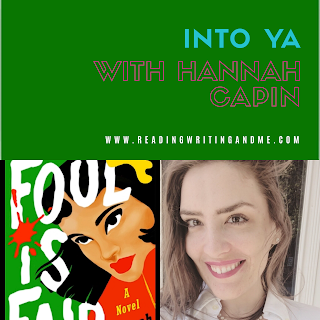 Today I have Hannah Capin on the blog to talk about her new book, out next Tuesday, called Foul Is Fair. I reviewed it a while back, so if you're looking for a recap or to learn more about the book, you can find that here. I also ask questions about her last book Dead Queen's Club and you can find that review here. Beyond that, enjoy my interview with Hannah!

1) Your book has a very interesting tone. Jade's emotional state at the start of the book really comes out in the tone and the way Jade tells her story. Did that voice come to you from the start or was it something you had to cultivate?
The voice is usually the first thing that comes to me when I’m working on a new project, and FOUL IS FAIR was no exception! The very first bit I wrote wasn’t an outline or a character sketch: it was a scene, written in full, and it started with the line “Sweet sixteen is when the claws come out.” That’s still the first line of the book, and in fact the entire first chapter is almost unchanged from the scene I wrote late one evening in a coffee shop.
2) Both of your books revolve around murder, but they always have a twist and a deep layer of revenge with them. Would you ever consider writing a more straightforward murder mystery or thriller, or are these elements just things that sneak into the other story ideas you have?
Never say never! I plan to write for the rest of my life, and I won’t limit myself to any genre. But revenge is a theme I love to explore—especially through other themes like sisterhood, power dynamics, and what it means to be a teenage girl.

3) I did want to ask you a question about Dead Queen's Club because I'm still obsessed with the idea of a modernized, high school King Henry VIII historical retelling. Where did that idea stem from? Were you a major European history fan or just intrigued by the story? Was it difficult to balance using pieces from the source material and taking your own liberties since your story is so distant from the history? Was it easier or more difficult to head into Foul Is Fair with a completely original story?
I’ve been obsessed with the six wives, and especially Katheryn Howard, since I read a novel about Elizabeth I when I was in middle school. As an adult, having read a lot more about the Tudor era—from highly fictionalized books to dense biographies—my love for Katheryn Howard continued, and I found myself wanting to change the narrative about her. The rest of the wives have been more or less rehabilitated in the eyes of both academia and pop culture, but Katheryn Howard still gets written off as having “had it coming”—there’s a well-respected biographer who refers to her as “empty-headed” and a “wanton floozy.” She was a teenage girl flung into a situation in which she was doomed from the start, and every contemporary source suggests she took her role as queen very seriously and was also just a delightful, generous, earnest person. I set out writing THE DEAD QUEENS CLUB to challenge the narrative on Katheryn Howard and to deconstruct the cultural norms that allow us to keep slut-shaming and victim-blaming a teenage girl who was murdered 500 years ago.
In terms of balancing history and taking liberties, it was sometimes challenging since I didn’t want to leave anything out—but it was fun figuring out how to translate one world into another, and how to sneak nods to historical detail into the book without disrupting the narrative for readers who weren’t as familiar with the era. (For example, I fit all six queens’ mottos, as well as Henry VIII’s motto, into the text!)
Every book is different, and FOUL IS FAIR was definitely more straightforward from a plotting perspective. It’s also a much shorter book: it’s just under 80,000 words, while THE DEAD QUEENS CLUB is nearly 100,000—quite long for a YA contemporary.

To preorder it now: https://wednesdaybooks.com/the-real-deal/foul-is-fair/

Links of Interest:
Should Books be Adapted
How Not to Die
Guest Post: Claire Bartlett
Reckless Daughter