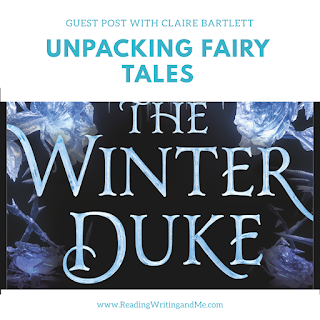 This week I want to welcome author Claire Bartlett to the blog to talk about the fascinating history of fairy tales throughout culture and how they play a role in her new book, The Winter Duke (out March 3). I've been a huge fan of fairy tales my entire life (I even wrote a giant paper on the Brothers Grimm for a school project once), so it was so much fun to read about the history of a couple tales that Claire uncovered in her research. If you missed the last time Claire was on the blog to promote her debut, you can find that post here.

I always wanted to write a fairy tale retelling, and it only makes sense to me now that I'd combine fairy tale, history and fantasy to create The Winter Duke. Fairy tales have long been intertwined with history, and in fact it's now estimated that fairy tale tropes go back thousands of years, being retold and reworked to fit audiences. Many of them were somewhat cemented in the public mind after being written down by the Grimms, among others, and these are often the fairy tales we treat as canon when we decide to adapt them for modern novels and retellings.

Fairy tales have long been evolving constructs, and while a number of them are certainly fiction, others may be rooted in, or allude to, fact (there's a lot of debate here, of course, but that's half the fun). For example, the tale of the Twelve Dancing Princesses, a story I particularly love (and that served as a very vague jumping-off point for The Winter Duke). Some people claim that the tale originates in a real historical event. And honestly, the event seems more ridiculous than the fairy tale: The dancing plague.

Yes. This plague was all about people dancing. It took place in Strasbourg, now in France. According to chroniclers at the time, the plague began with Frau Troffea, who began dancing uncontrollably and was soon joined by dozens of others. They didn't stop to eat or work. People collapsed, bloodied their feet, suffered stroke and exhaustion, and even died. The plague went on for a month, and though there are many theories (accidentally ingested hallucinogens, mass hysteria), no one has a real answer as to why. But we do know it happened. And it didn't just happen once - there are other documented cases in Germany and Switzerland.

Some people theorize that this spurred not just The Twelve Dancing Princesses, but another fairy tale: The Pied Piper of Hamelin. Others say The Pied Piper has much more grisly origins.

Several accounts say that in 1284, 130 children disappeared from the town of Hamelin. Some claim their disappearance is a reference to the Bubonic Plague, or Black Death, which swept through Europe in the 1300s. It could also have been a euphamism for the senseless and awful Children's Crusade, in which children were encouraged to go from all over Europe to Jerusalem to convert the Muslims with their youthful innocence. As many as 30,000 children left for the Crusade, and most of them died from famine, exposure or disease along the way. A little less horrid is the theory that a recruiter, known as a lokator, used to go from town to town in Germany and convince people to move to less populated places. Scholars have found surprising name similarities between the family names of Hamelin and other towns around the same time - towns in places like Poland, which is not known for its Germanic surnames.

(Did I mention I wrote a take on the Pied Piper? It's just a few hundred words and you can read it here: https://dailysciencefiction.com/hither-and-yon/sf-fantasy/claire-bartlett/we-do-not-know-what-happened-to-the-children)

Fairy tales have also changed over time. For example, The Pied Piper didn't always start off with a plague of rats. The rats were added later (perhaps they are the reference to the Black Death). As people absorb and retell them, they add their own details to fit the fairy tale to life as they know it. Oftentimes, they use the fairy tale as a kind of social or politlcal commentary. Take the lovely tale Rumpelstiltskin. I read somewhere (and sadly I haven't found it again!) that many more modern takes on the fairy tale (i.e., the Grimm era in the 1800s) referenced the way weaving was changing from a man's job to an industrial, machine-led job.

When I was writing The Winter Duke, I considered using the dancing plague as the curse that strikes Ekata's family. In the end, I decided to use some history that lay outside the may-have-inspired-a-fairy-tale realm. I couldn't help it. This story blew my mind.

Picture this: I was reading a history of the Romanov dynasty. I come to the late 1700s, where the slimiest creature ever to walk this earth waltzed onto my page. His name? Peter Ludwig von der Pahlen. His crime? Committing regicide. But he didn't just kill the Tsar, Paul. No, he connived his way into a coup. Von der Pahlen was a nobleman who ended up in the trusted circles of both Tsar Paul and his son, Alexander. Von der Pahlen played father and son against each other, convincing each of them that a coup drew ever nearer, and that one of them would perish at the hands of the other. Eventually, things came to a head and the old Tsar Paul was dispatched by his son, all through von der Pahlen's slippery manipulations. And the worst thing? He got away with it. Even when he was discovered as the double-crosser he was, he slithered out of an execution and got himself exiled for life instead. I read this story and I couldn't fathom how someone could get away with doing everything Peter Ludwig von der Pahlen did. Obviously, I had to make a novel out of it. The story changed a lot, but he was the catalyst for the political plot of The Winter Duke.

Go forth, friends. Read fairy tales and don't scoff too much at their outrageousness. They might have some grain of truth to them! And if you want to indulge in a queer frozen fairy tale, check out The Winter Duke,coming your way March 3rd.


I hope you enjoyed today's post! If you're a blogger on an author who wants to do a guest post, don't be afraid to reach out by emailing readingwritingandme@gmail.com.


Other Posts by Claire...
Guest Post: Travel and Writing

Links of Interest:
Reckless Daughter
January 2020: A Month In Review
One of Us is Next
Serving the Servant