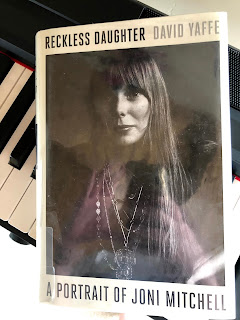 Reckless Daughter by David Yaffe
Overall: 3.5
I wasn't sure what to expect when I picked up this biography of famous musician, Joni Mitchell. I haven't heard a lot of her music, and I didn't know anything about her life story at the time. After reading Serving The Servant, though, I was inspired to read more biographies of musicians. Going in, I only knew that Taylor Swift had referenced Blue many times in her journals and Harry Styles had gone on a quest to find the woman who made Joni Mitchell's dulcimer so he could play one on his new song "Canyon Moon". I wanted to learn more about the person who made such an impact on two of my favorite artists.
It's taken me a while to figure out how to write and frame this review since I finished the book with such mixed feelings. Tackling it from a purely writing prospective, I feel like the pacing and distribution of story could have been better. When I started it, I was hooked. I really enjoyed the writing style and the personal connection the author seemed to have to her work. The primary sources for constructing the story came from interviews with Joni late in her life and with people close to her. At the beginning, her life story was fascinating. There were tons of twists and turns. It all felt truly modern and barrier breaking for happening in the 50s, 60s, and 70s. David explores the ups and downs in her personal life and how the spurred the development of her career and artistry. He does a good job of painting a compelling, human portrait of an artist in a great deal of detail. After her career got started, the book was broken down and guided by eras and albums mostly. There's a great deal of song analysis and piecing certain songs back to the people who inspired them. There are amazing stories of self discovery and relationships that failed but weren't failures. Even without context, I enjoyed a lot of the discussions of a time I was largely unfamiliar with and music I'd never heard.
The problem, though, was that a meticulous, painstaking amount of detail was employed through the entire arc of the book. There comes a point where every little moment doesn't feel like it needs to be captured. After about 250 reading just felt monotonous and tedious as the same ideas and realities were repeated over and over and a detailed look at the songs no longer felt enlightening. I guess it didn't help that towards the end, Joni also started to become a more questionable figure. I lost a lot of the admiration I'd built towards the beginning and just felt generally unsettled. There was a lot of use of blackface that she was quite cavalier about when questioned and seemed to think it was her right. Also, this section wasn't as articulate or well drawn as some of the earlier chapters which made it even more confusing. I get that David Yaffe wanted to chronicle an entire lifetime of a revered figure in music and that takes space and time to execute, but I don't feel like he needed to include every little twist and turn of each relationship to get there. As I got tired of reading, it seemed like he got tired of writing too as the whole thing seemed to have lost its zest without dropping in word count. It felt like even as I spent large chunks of time reading, I was getting nowhere. If I'm being honest, I skimmed the last quarter of the book because I just wanted to be able to move on.
Overall, I guess I just feel conflicted because I loved the first half of the book so much and the second half was difficult to get through. I'd definitely say you have to feel far more invested in the entire, detailed catalogue and life experience of Joni Mitchell than I was to be totally satisfied with the book. I feel like Serving the Servant was much more my speed because it set the scene and gave context while also sticking to the most pertinent events to tell its story. It never gave itself the opportunity to lag. I wish the scope of Reckless Daughter had been a little more focused.

Links of Interest:
January 2020 Reflection
One of Us Is Next
Every Other Weekend
Into YA with Emma Lord