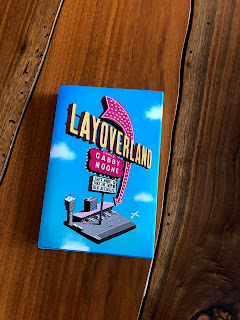 Layoverland by Gabby Noone
Overview: Bea doesn't know what's going on. One second she's battling with Siri who insists on playing "Hey Soul Sister" the next she's flying through a windshield and waking up on a weird airplane. She quickly realizes that possibly the worst day of her life was also a last, and now she's stuck in an airport otherwise known as purgatory. If living in a horribly boring airport isn't bad enough, Bea has to work in the memory department to help move other souls on to heaven to make up for the bad things she did in her life. They weren't worthy of sending her to hell, but she's certainly been less than nice to quite a few people. Told in chapters that fill in the catastrophe of the last day of her life and her experiences at the airport, Bea goes on a real journey that teaches her what's important about life, even though she can only apply it in death. Overall: 5

Characters: 5 Bea makes the book. She's a character you're either going to fall head over heels for or you're not going to like her. Obviously, I loved her. The book is so full of sarcasm and dry humor that I clicked with perfectly. Bea is a realist and someone who's not afraid to say it like it is- to a fault. Her fuse is quick to snap, and that doesn't serve her super well in life or in purgatory. Her heart is deeply in the right place, her execution, though, not so much. She's an amazing sister for all her other shortcomings, and she cares so deeply it's hard not to route for her.
The supporting characters are also great. They're not nearly as dimensional as Bea, but that's because they're all clearly filtered through Bea's point of view. As the book goes on and her empathy increases, the nuance of the supporting characters do too which shows a lot of strength in the writing. Sadie is Bea's guide to her new job in the memory department. She's still in her 21 year old body, but she's been dead since 1989. And Bea's successful training is a ticket to heaven. For as flat as she can be at times, she plays an instrumental role. Then there's Caleb who suspiciously has the same time and place of death. Was he the driver that killed her? But he is cute and smart too. With Caleb, Bea starts a relationship she was never able to have in life, and he slowly teaches her the value in vulnerability. And finally there's Jenna, Bea's roommate who died of cancer as a teen. She's innocent in a way that reminds Bea of the sister she'll never get to resolve her differences with, and Jenna acts as a mirror to Bea's relationship with Emmy. Also, Jenna's intense optimism forces Bea to reexamine her earned pessimistic outlook.

Plot: 5 I did not want to put the book down! There's a great balance of character driven and plot driven narrative. They're always working towards some kind of goal with the right amount of twists and action, but the entire plot is really focused around Bea interrogating the way she lived and how others did. It kept me guessing as a romance that seemed bound to end Romeo and Juliet style formed. I wanted to cheer for each of the characters, even when their goals were at odds with each other. While you won't be at the edge of your seat, you will want to know how Noone is going to tie together all of the variables of the characters and the very specific world. It's a predicable course of events, but she manages to make them all feel just as exciting as if you didn't see it coming through humor and her unique lens.

Writing: 5 I love books that are funny and I love deeply thought provoking books. I figured I was bound to love this one. As I said earlier, the humor hit perfectly for me. Also, I loved how 2020 the whole book felt. Every reference the teen characters made and how they spoke felt so normal and natural in a way that felt immersed in teen culture instead of mimicking it. This is oddly an extraordinarily hard thing to totally nail in the YA genre.
Noone does a great job of mixing the dark and funny. Most of the book I was laughing and smiling, but there are some hard hitting moments that made me question if I was getting teary. It's a very thought provoking story for how superficial the plot points can seem at times. It's a heavy area to explore, but Noone makes it approachable and easy to fly through. I also have to applaud both the author and editors for knowing exactly when to end the book. So many books I've read lately have felt drug on unnecessarily long, and this one ended just where it needed to allowing me to want just the slightest bit more.