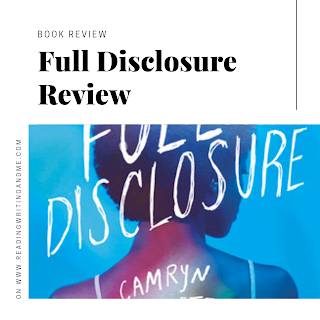 Full Disclosure by Camryn Garrett
Overview: Simone is HIV positive. It's a disease she's had to contend with her entire life since she was born with it, but under careful medical care, she's able to live a normal, healthy life. She's had to change schools due to her status getting out and the bullying that ensued, but, at Sacred Heart, she feels like she's finally found her place. She's directing the school musical, has a great group of friends, and a potential boyfriend on her radar. Life feels pretty close to perfect until notes threatening to reveal her status start popping up in her locker. They threaten to topple everything she's built in the last few months, but she doesn't know what to do. Overall: 4.5

Characters: 5 It's the characters that make this book. Simone is lost in a lot of aspects of her life in a super relatable way. She wants to study theater in college but doubts whether that's a practical choice, and she feels unsure about her sexuality. She also wonders if she'll ever be able to have a totally normal life due to her positive status. Her status is a part of her, but she in no way lets it define her.
The supporting cast is also great and bring out different sides of Simone. I love that her parents are heavily featured in the book. She was adopted by her Dad and Pops, and they're both incredibly supportive. They also give an insight into what Simone has been through on the way to getting her viral load undetectable as they're a major part of her doctors appointments and care.
Then there are her new best friends, Lydia and Claudia. They're her support system, and you know that they'll always have her back, but they fight like a real friend group. They have one of the most realistically portrayed friend groups I've ever seen in YA.
Miles comes into the picture at drama club. He's working on the crew after his lacrosse season is taken out of the equation by an injury. There's a quick connection with Simone that develops over the course of the book and leads to a lot of new questions that Simone has to tackle with the guidance of her friends, parents, and doctors. Despite her worries, Miles is a genuinely good guy and proves that not everyone will react as poorly as she's experienced in the past.
There's also the kids she goes to support group with. Though they've known each other for years, they start out on icy terms at the start of the book. Everyone resents being there, so they don't care about becoming particularly close. As she falls out with her other friends and her status becomes more and more of an immediate issue in her day to day life, she grows closer to this small group of kids who can fully understand what she's going through.
What I love about all of these characters is that they have their fair share of flaws and bad moments, like all of us do, but you can tell that they all have incredibly good, caring hearts. I really enjoyed getting to see a main character with a full support system made up of characters I genuinely became attached to. Also, the representation in the book is incredible and captures a really full spectrum from a diversity and sexuality standpoint. Beyond Simone's dads, Lydia is bi and Claudia is ace and a lesbian while Simone is questioning. The conversations that the girls have about the topic are really organic and insightful and honest. I really appreciated that as a side narrative.

Plot: 4 The plot in this book is really secondary to the characters and the little moments between them. There is a strong structural line as the mystery and threat of the notes increases and the deadline creeps closer, but that wasn't the part of the story that had me hooked. I loved the random scenes of deep conversations or tentative cute moments or the emotional moments where Simone is forced into real revelations. If you love just experiencing characters and their dynamics like I do, then this is the book for you. There are plenty of plot twists to pair with the indulgent scenes, though, if you are a plot based reader.

Writing: 5 One interesting thing to point out about this book is that it was written by someone who was a teenager at the time of writing it and is currently in college. I think that's what made the book for me. Her writing sparkles and has the added benefit of seamlessly reflecting what it's like to be a teen right now. There's no out of sync moments with our current world, and all the interactions feel so natural. She's not having to put thought into how teens talk to each other or shove a twenty year old high school experience into the present day. While almost all major house YA books are written by adults who can write great books, there's no replacing the extra level of depth and understanding you get out of a YA book written by someone immediately experiencing being a teenager. Teens get written off so easily in professional spaces, and I can't imagine how much Camryn's had to fight to be taken seriously, but this book is great proof of how teen voices would greatly benefit the genre. I'm so excited to see what she'll write next and to find more authors like her.
The book was so much fun to read and the perfect escape. I'd DNF'd a couple books before I remembered I had it on my Kindle, and I just clicked with Full Disclosure immediately. I hope that the book will continue to entertain and educate teens and adults about what it's like to be HIV positive. I didn't know much about it before the book, and I don't think it's something that's discussed in such a nuanced way enough. I also think that the range of characters and diversity will allow every reader to find someone that represents them in the story.
My only note on this book would be that it's probably best suited for at least high schoolers and maybe those on the older teen end. There are a many conversations about sex in lots different contexts that aren't really sugarcoated. It's super important, and I'm glad that there are books with that level of openness and focus on being informed, but definitely stick with whatever your personal comfort level is.


Links of Interest:
When We Wish On Stars- Part 1
March 2020: A Month In Review
Books I'm Looking Forward to in April
The Lucky Ones Review
Reading Weekly Reviews and Recommendations