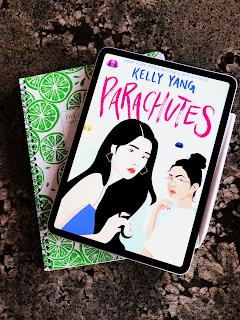 Parachutes by Kelly Yang
TW: Sexual Assault
Overview: Claire and Dani start out feeling like they live on two different planets. Claire has lived a glamorous life in China, cared for by live-in help and constantly picked up after. Every argument with her dad ends in a new purse or pair of shoes, and she's never had to seriously want for anything. Dani and her mom work for a housecleaning service to stay afloat. She attends American Prep on scholarship and works hard to fund her debate travel. Eventually, her mom signs up to host an international student to make a little extra money. While Claire and Dani originally clash, their experiences over the course of the school year make them realize they have more in common than they originally thought. Overall: 5

Writing: 5 This book is incredible. Yang delivers a fully immersive world. In the author's note she delves into the amount of research that contributed to the book, and you can feel it seamlessly blend in here. Her style is immediately engaging, and Dani and Claire both have distinct voices. She makes it easy to live in their heads. Yang's pension for realism with plot points and focus on nuance makes it a truly special reading experience. It was fascinating to read about this group of kids navigating an augmented adult world without the tools they needed. The situation the program leaves them in forces the parachutes to become adults without understanding that they really are still kids. Yang explores this in a fascinating way. She also calls attention to a ton of important topics. If you've experienced it, you'll feel seen and a sense of healing from her portrayals, and if you haven't, she provides and excellent window into the reality. This book feels like it has the potential to truly make a difference.


Links of Interest:
Verona Comics
After the Show- Original Writing
Into YA with Marisa Kanter
YA Books For Mental Health
New Release Wednesday Reading Standout Book Weekly Reviews and Recommendations