The Summer of Everything YA Book Review 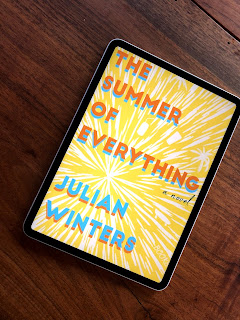 The Summer of Everything by Julian Winters

Want a Copy Right Now? Use my Bookshop link to support the blog! Here.

Overview: Wes doesn't know what he wants to do with his life. He has an acceptance letter to UCLA, but he's not sure what he wants to do with that. He loves working at Once Upon a Page, the indie bookstore he's worked at for a number of years. It's the perfect chill job where he's surrounded by comic books and all his friends. When it seems like Once Upon is going to close and his best friend/crush Nico is getting ready to move all the way to Stanford, Wes feels like his entire life is falling apart. He doesn't know what the next step is, but he's going to fight to keep the bookstore (and a bit of his childhood) alive for as long as possible. Overall: 4

Characters: 4 Wes isn't totally lost. He loves what he's doing right now, but he's realizing that can't be forever. He's scared of making the wrong move for his future, so he fights to hold on to the familiar pieces. It's what makes him too scared to tell Nico about his real feelings for him. He can't risk losing Nico as a friend, even though he's moving so far away.

This book really is an ensemble story. Everyone who works at the bookstore (they employ only young people it seems? as a former bookstore employee, this is by far the least realistic part of the book) plays a major role in the story. They range in age from typical YA age of 16 (Cooper) to end of college aged almost full adults (Anna and Kyra). This span of ages created some really interesting dynamics and a sense of mentorship among the co-workers that was really sweet. The main characters, though, are Ella, who is Wes's best friend and living with him for the summer, Nico, and Wes. They're all the same age and reaching similar junctures in their lives.

Most of all, I loved the realism that all of these characters are approached with. The book is so diverse on every level in a super casual way. I was so excited to see minor characters who had aro-ace and bi/pan rep that simply existed in the world. I also really appreciated how each character had a different approach to figuring out life and they were all seen as equally as valid and successful. There's no one path.

Plot: 4 This is a super character driven book. There's the arch of saving the bookstore, but that doesn't kick into full gear until the final half of the book. There's a lot of pining and indecision over whether Wes's crush is requited or not. There's plenty of angst and wading through life stuff. It's all relatable, and all the little scenes and quick chapters come together to keep the plot moving.

I really liked the ending and seeing where everyone ended up in the end during the epilogue. I also was super pleased with the ending scene where Wes finally talks with Mrs. Rossi who owns the bookstore, and it feels like a major culminating moment for the story where the pieces click together.

*Mild Spoiler For The Ending For This Paragraph* My only little complaint is that I wish that Wes had gone with the other love interest instead of Nico just to show that sometimes crushes don't work out. That resolution felt a bit too perfect, but given that they lose so much in other aspects, it was understandable why Julian wanted to bring them together in the end to give a partially happy ending. I'm just a reader who loves unhappy endings for some reason, but Julian actually sold me on shipping Wes and Nico.

Writing: 4 YA readers might be a bit thrown jumping into this book because it's in 3rd person. 1st person is my definite preference for reading, so it took a minute to adjust to Wes being the main character and reading his name over and over again. I got disoriented a few times (but, again, that's totally a me problem). Overall, though, I really enjoyed Julian's writing. He manages to write YA that feels so in touch with today's world in a way that most books aren't. Though it's not explicitly named, there's a reference to Immoral Code which I loved because it's an Easter egg that you'll only get if you're deeply in the YA world. It made me so happy to see book references that weren't just Harry Potter or The Fault In Our Stars. It's one of the most relatable books I've read in a while, and it was nice to read a book that felt so easy and laid back. It was easy to soak in Julian's world.

Get a Copy of the Book!

Wes has so much confusion around starting college. I just did that myself. If you're curious about what online college is like check it out here.

*All buy links are affiliate links which means I make a small commission on your purchase at no cost to you! It goes such a long way to support the blog*