War and Speech YA Book Review 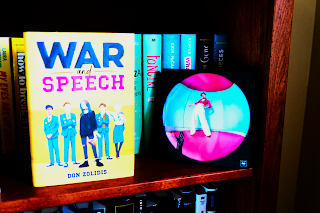 War and Speech by Don Zolidis
Overview: Sydney's life is a bit like a tornado. After her dad heading to prison wrecked her first semester of Junior year, she transfers schools with her walls up high and her tongue extra sharp. Sydney is deeply sarcastic, speaks her mind maybe too often, and is happy to join conspiracies to take down the school. She finds them in a group of outcasts tormented by the speech and debate team. She ends up joining down with an eye towards taking them all down and getting the coach fired. While she goes in with one mission, she finds a lot more than she bargained for on the team. Overall: 4.5

Characters: 5 I love, love, love Sydney. She's so cynical and sarcastic and completely hilarious. She says a lot of the things that I think, so it was a joy to see the world through her eyes. It's nice to see a YA character in high school who plays into it as a complete outsider in the sense that she doesn't even want to play the game or be a part of those politics. She's incredibly smart but also has some deep insecurities from past rejection and trauma. She has to fight them through the book. Sydney is also forced to navigate being one of the few kids in her new school who has money problems and a single mom who works full time. She has to deal with not having her dad in her life really and figuring out what that means for her. Sydney looks at the world through a very unique lens, and I loved how much that came through.
Every character in this book has such a detailed story and distinct way of speaking. It's almost like everyone in the book is a little bit brighter and more heightened than the average person. The book is built so firmly on the characters and voice that their craft just makes everything more intense. From Sydney's friends that she makes on the first day of school to the kids she interacts with through the speech team and her mom and her new boyfriend, each character comes to life with a very specific window into a different world than Sydney's for all kinds of reasons. Even with the villains, you get to see Sydney understand where they're coming from and grow from that.

Plot: 4 The plot in this book unfolds slowly. If you're looking for fast pacing, you probably won't click with this one. To develop the characters and the voice on the level it is, there's a lot of space taken up by getting deep into scenes and adding ones that don't necessarily further the plot. For instance, it took about 100 pages before the squad starts forming the plan to take down the team. Given that the book is 400 pages, it falls in about the right place, technically, but it does mean that this'll be a longer read.
Their plot to destroy the team ended up being so good and satisfying because it uses tech and random plots in a way that I could really see a teen both coming up with and executing. It's an extravagant and like a super hero movie, but it's also grounded and creative within realistic bounds, which I really expect. It's a slow burn, but it's satisfying.

Writing: 5 If you know anything about Don's writing, it's that he's hilarious. He's well known for his funny plays, and his first book The Seven Torments of Amy and Craig had me laughing out loud. If you enjoyed his first book, this one will definitely deliver. I might even like Sydney better than Craig. I love how rich he's able to make the world, and I'm always hooked by voices that jump off the page and feel tangible.
I will say that it is a slower read. I've been super, super busy so I haven't been reading super consistently, but to fully appreciate and understand everything that's going on, it definitely takes more time to digest.

If you want to hear me talk more about War and Speech, I've featured it in 2 past YouTube videos that I'll link down below and include in the post if you're interested. The book was in my August Favorites and my first ever book haul!

Links of Interest:
August Wrap Up 2020
Into YA with Laura Silverman Part 2
Not Your #Lovestory
Our Chemical Hearts Movie Review