Into YA with Don Zolidis 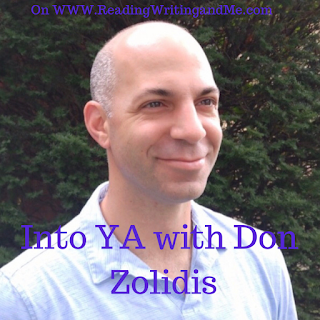 I'm so excited to get to post this interview today. I absolutely love The Seven Torments of Amy and Craig. It's such an interesting, vibrant, emotional, honest, and fresh book. If you like nonlinear timelines or accidentally laughing out loud in public, you'll love this book. If you're not familiar with the book, I recommend reading my spoiler free review before coming back for the interview, and if you'd like to purchase the book, you can click my link here to buy it from Indiebound.

1. The book is set during the 1993-1994 school year. What made you decide to set it in the not so distant past instead of the present? Did that make it easier or more challenging to write? Do you think Amy and Craig’s story would be any different had it taken place in today’s world?


The book is inspired by an autobiographical story of mine (although LOTS has been fictionalized) so I set it in the time period when the inspiration actually occurred. Since I was alive and a teenager in the time period, it didn't make it any more difficult than any other story. I think the main difference is the lack of cell phones. This is right before the internet came into everyone's life, and before anyone even had a cell phone. So there are times when Amy and Craig can't communicate with each other - on Craig's trip, he and Amy are out of communication for 4 or 5 days, something which would be hard to imagine in a couple in today's world. That creates opportunities for misunderstandings, or anxiety, or even not knowing what the other person is up to or what they're doing (which becomes important later in the story).

2. The story is told not entirely in chronological order. I heard you mention at Teen Book Con that you wrote the book linearly and that it was always in this order. Why do you think that the story came to you in this way, and do you think that it presented any unique challenges when writing?

This is kind of a memory story, so I imagine that Craig is remembering his relationship with Amy. When we remember things, we don't remember them in chronological order either. If you think back about something, some kind of story, you don't start from the beginning and go to the end - certain moments jump out at you, out of order. So that was the concept. Since the story isn't chronological, it has to build emotionally instead of plotwise. The first breakup they have is one of the hardest, and it comes right in the center of the book - it also reveals something huge that the reader didn't know until that moment.

3. It’s not a spoiler to say that Amy and Craig don’t have a happily ever after. I absolutely love this twist on contemporary YA because it’s far more realistic than the general happily ever after. Why did you choose to write it this way? Did you ever wonder if it would be a harder sell with it not being a classic love story?

I think the fact that it's not a HEA sets it apart a bit, and causes a big challenge. That's why there is a spoiler alert in the prologue that says that they won't get together in the end. I think this is a story about first love, and first loves so rarely work out, that it's definitely more realistic. I also think it's interesting to think that this book kind of starts where most romances end - the couple getting together.

4. From reading the acknowledgements, it sounds like the book started as a play. How did you go from imagining it as a stage show to deciding to make it a novel? Since you write tons of plays, how does being a playwright impact being a novelist and vice versa?

Yes I wrote this as a play initially. It was a fairly short play, actually, only about 60 pages, so there was A LOT less to the story. It was a little snarkier, and less emotionally true, and the break-ups were played more for laughs than for pain. (They're still played for both.) But I remember watching a performance of the show and thinking that there was so much more to the story that I wanted to tell, and so much I couldn't get across in a play. I think being a playwright means that I tend to focus on dialogue rather than description (when you're writing a play you never have to worry what someone looks like, or what clothes they're wearing, or what they're doing with their hair!) so I think that was ultimately a benefit to the book, because it kept it moving forward very briskly.

5. I adore this book, and I can’t wait for more books from you because your voice is spectacular. Do you have any upcoming projects you can talk about (or at least hint at?)

My next book, THE SPEECH TEAM MUST DIE, is slated for May 2020 from Disney-Hyperion. It's set in the modern day, and it's about a girl who joins the top-ranked speech and debate team in the country, in order to destroy it from the inside out.

To Purchase
Books by this Author...
The Seven Torments of Amy and Craig: Review Here