Into YA with L.D. Critchon 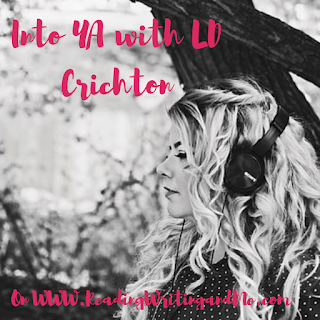 All Our Broken Pieces is one of my favorite books of the year! I'm so excited to get to talk to L.D. about the book and her unique path to publishing. If you haven't already, I recommend you go ahead and read my review so you have some context, and if you'd like to purchase the book, you can use my link here.
1. Since All Our Broken Pieces is your YA debut but not your official debut book, I’m wondering about its beginning and publication process. Why did you decide to write a YA story. What was its road to publication like? Did already having another book, even though its in a different genre, influence your path?
I love this question! It’s not technically my official debut but it is in a way because it will be the first time I’m ever able to physically hold a paper copy of one of my books in my hands, and who doesn’t dream of that? I still need to pinch myself some days to remember that this is real!

My writing history involves starting to publicly share my work on the platform, Wattpad. For a very long time all I wrote was YA. The first novel I ever finished (it’s kind of cringeworthy) was YA posted to Wattpad.

The book that came before ALL OUR BROKEN PIECES is the same one that got me signed with my agent, and obviously was my first published work. At the time, New Adult was massively popular on Wattpad, so I wrote a new adult story called THE ENCHANTMENT OF EMMMA FLETCHER. It got picked up by pocket books (which is the ebook division of Simon and Schuster), removed from Wattpad, and e-published.

Afterward, my agent asked for more ideas so we could chat about what to work on next. I figured I should make it similar to my existing genre and I sent him 6 or 7 ideas. ALL OUR BROKEN PIECES was the only YA idea on that list. I told my agent that’s what I wanted to write the most. It’s where my best writing voice came from and where I wanted to go again. He fully supported the idea and I started writing.

I have a very unusual road to publication for this specific book—although not unusual for many writers on their journey in general. I suppose the road started 15 years ago when I decided I wanted to be a published writer and naturally an uphill climb, many stories, countless rejections, self loathing, questioning life choices, dusting self off, getting up, trying again followed for many years.

But from the day I sent my finished manuscript to John, my agent, it went out on submission about two weeks later . Three weeks after we had our first reply which was a preempt offer from Hyperion. The rest, as they say, is history. :)

2. You masterfully craft both Lennon and Kyler’s voices to be completely distinct, which is not an easy skill. What helped you find their voices, and what advice do you have for writers who are trying to write multiple POVs?
You kind of answer the question in your question. The key is making your POV completely and utterly distinct. If there were no chapter heading you should still be able to tell who is doing the talking. People are so unique as their authentic selves. We think, talk, look, and feel differently, Your characters need to do this too!

As for their voices, I don’t know—dig deep ? Characterization is what drives a story. Use your own thoughts and feelings and experiences and inject those into your writing as much as possible. If you have friends that have the coolest personality traits, or outlooks on life, borrow from them. As a writer, you need to collect pieces of people and their stories and their feelings and experiences in everyday life and put it on the paper. In my opinion, that’s the key to making characters relatable.

3. Kyler is a musician and a skilled one at that. Was that always part of his character? I love all of his lyrics and wish they were real songs! Were they hard to write?
I have an unhealthy obsession with music and a weakness for musicians. 100% always always part of his character. I tried desperately to teach myself the actual fundamentals of a song, like verses, and bridges, etc but most of them still ended up basically as poems. It was not hard to write them, because by that point, I felt Kyler so deeply, it was easy to express what he wanted to say.

I used to write these poems for my parents on post its or write them on looseleaf and draw flowers around them and put them in their cars, or on my mom’s mirror, like from a very small age until probably 16 or 17  years old. When my mom passed away, I actually found a binder where she’d kept so many of them. *sobs*

4. Lennon struggles with OCD, and you do a remarkable job portraying her and her OCD with honesty, sensitivity, and accuracy. What went in to building Lennon’s character? Did your prewriting involve lots of research on the subject?
I’m going to preface this answer with this. I know a lot of readers are going to have this question and I’m happy to answer as open and honestly as I can, but please note that I’M NOT AN EXPERT. The answer is based solely and completely on my own experiences, thoughts and opinions as a person.
I have an anxiety disorder that I take daily medication and see a therapist regularly to manage. Lennon and I share a lot of similar fears, so writing about OCD (I thought at the time) would allow me to explore that in a relatable way but also ‘remove’ me enough as the creator of Lennon and Kyler’s world.

I did a lot of research. Hours and hours of reading and watching multiple documentaries, a lengthy phone call with a psychiatrist who specializes in youth and mental health, speaking to friends with OCD.

However, the further I dived in to this world, the more I began to question if my mother had it. She passed away 13 years ago, so I can’t confirm but several of the things Lennon does in the book came from routines I was taught as a child—we always thought my mom was a ‘clean freak’ but now that myself and my two of my children all struggle with diagnosed anxiety issues, I suspect there is much more to it than that.

Lennon’s catastrophic way of thinking is at it’s core, is a reflection of  my own anxieties magnified on paper. I can’t relate to her compulsions, but I 100% understand her thoughts. I have always been a ‘worrier’ but after losing my mom, it’s been a struggle that I battle with all the time.

For all of these reasons, I sincerely hope Lennon is real to readers as much as she is to me.

5. Your YA debut comes out next week, but I’m already excited to see more of your work! Do you have any upcoming projects you can talk about?
Thank you! I’m so excited! I’m working on a manuscript that is currently homeless called (tentatively) Caged Birds Can’t Fly and have a few other ideas in the works— it’s a matter of time, which, due to unforeseen recent circumstance, I have some of now… so the future looks bright!


To Purchase
Books By This Author...
All Our Broken Pieces: Review Here

Links of Interest:
What's Coming Up In May: Here
Ship It: Review Here
Taylor Swift and the ME! Era: Here
With The Fire on High: Review Here
Into YA Reading Writing Writing Tips