Ship It by Britta Lundin (375 pages) To Purchase From Your Local Bookstore (Affiliate Link)
Overview: Claire loves the TV show Demon Heart, so when she learns they're coming to comic-con in Boise, she can barely contain her excitement. Once at the panel, she decides to use her chance at the mic to try to push the showrunner into making her favorite ship cannon. Claire's written Smokeheart fan fiction since the show came on the air, but it's no longer enough to read hers and other's reimagination of the show. She wants it to be real.
Forest Reed does not love Demon Heart, but he is contractually obligated to be at comic con in Boise. He is contractually obligated to pretend to love Demon Heart because he's half of the show's lead. Smokie is his first role outside of a Honda commercial, and he needs it to launch his career. That means Smokeheart becoming cannon is definitely not in the cards, and, when he says so, with barely a scrap of tact, the fan community blows up in anger.
It turns out, Claire has to stick around for the long haul. Overall: 4

Characters: 4 The characters make the story. They do a great job of driving the central plots and themes. While sometimes they veered a bit into seeming like a blanket set of values, overall, they were dynamic and interesting.
The two points of view did a great job enhancing the story. Claire really represents the most intense of the fandom group. She has a Tumblr, regularly posts fan fiction, and lives and breathes for her show. They are her friends and her life, and she expresses herself through them, so her connection to it is both personal and integral to her identity. She's also woven shipping the two leads, Smokie and Heart into this. While the characters are not gay in the show, Claire makes it her personal mission to make them cannon on her convention trip with the show. Because it is so personal and represents a part of herself she's not fully comfortable with, she becomes blind to any ramifications or effects getting her way could have on other people.
Forest uses the other POV to show to nuance Claire can't understand. He's on the show, and, while his initially poor reaction to Claire's request does show some amount of internalized homophobia, it also reveals other reasons that letting Claire have her way would effect their lives. His father definitely would not be cool with it, and, in the wider picture, it'd be hard for him to work again, especially in the war video game inspired movie he's gunning for the lead in. Even as he comes to see Claire's prospective, he still doesn't see it as feasible. Forest also provides an interesting window into the awkward parts of being a celebrity, like when Claire writes fan fiction about Forest instead of just his character.
Other great characters include Tess who is very secure in her queer identity but not as open about her love of the show, Caty who manages the social media presence for the show, and Jamie, the sour showrunner. All of these characters represent different opinions on the broader narrative around the story and have different levels of comfort with their self identity. 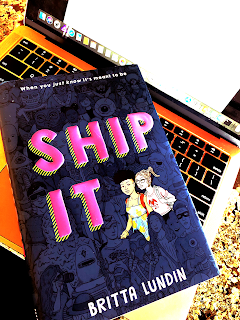 Plot: 4 The plot is very interesting. I mostly enjoyed Forest's story in offering a little window into what life is like as a celebrity on a show with a major, young following. Some of the intricacies he brings to life helps center the story and contrast Claire's grand mission. While everyone does have some great arch and evolutions, I do think the book could have been a little shorter and faster paced.

Writing: 4 I love how Lundin used the dual POV to both show us different sides of the argument and muddy the water between antagonist and protagonist. On the surface, it seems obvious that Claire would be the hero of the story as she fights for better representation, initially queer but then also other kinds, in Hollywood, but Forest puts that in prospective. As her relentlessness and extreme behavior makes a splash, it also jeopardizes Forest's current and future career. Without spoiling it, she puts Forest in a couple horrible situations in her blind campaign that make Forest seem like the true protagonist, especially in the end.
At the end of the day, it does serve as a great reminder that everyone is the hero of their own stories.

Links of Interest:
Taylor Swift In The ME! Era: Here
With The Fire On High: Review Here
Into YA with Jennifer Dugan: Here
Hot Dog Girl: Review Here