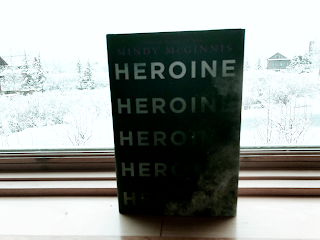 Heroine by Mindy McGinnis (417 pages) To Purchase From Your Local Bookstore (Affiliate Link)
TW: Depiction of opioid addiction
Overview: Mickey has it all. She's on the best softball team in the county, she has a supportive best friend, and, even though her parents have recently gone through a divorce, they both want to support her. And then she and Carolina get into a car accident on the way home to watch Netflix and eat pizza, a regular Friday night. Mickey's leg is all but torn out of her body, and her hip has to be put together with screws. Carolina, the school's near famous pitcher, nearly destroys her arm. As the girls fight to be ready in time to play their senior softball season, Mickey falls down a dangerous road, slowly upping her intake of pain pills to get through the day and to quicken her pace through physical therapy. Even as she tells herself that it's just for softball, just for her team, just for her parents, as she gets further in and her dependency increases, and she's not sure what to do because all she knows is... Mickey Catalan is not an addict. Overall: 5

Characters: 5 Mickey is an amazing character to follow. She's strong and analytical and a bit of a local celebrity. She's also adopted and has to wrestle with her feelings about her dad having a new baby with his new spouse. As her addiction worsens, she pushes her friends and family away, but she still craves their closeness. It's also interesting to see how her self perceived lack of social skills plays into the choices she makes and contributes toward her affinity for Oxytocin. She knows what she's doing is wrong, she knows she doesn't want to be an after school special, but she gets in over her head before she knows it.
She had a good support system in her old life, but the stigma around drugs and addiction from everyone made her afraid to mention it to anyone. Her mother is a doctor, but she's gone all the time, and, after the divorce, Micky doesn't want to hurt her more. She's angry with her dad and his new partner, Devra, a recovering addict herself. I love how much of a role Devra comes to play at the end. She's understanding and can give Mickey support without the anger and disappointment her parents can't escape.
She also feels like she can't go to her coach or teammates because she doesn't want them to see her as week. She's always been on top, and she's always been one of the strongest. She especially doesn't want to show any kind of weakness in front of Carolina because she inadvertently makes Mickey feel even more guilty about her pill use.
Instead, she turns to a new group of friends that she meets at her geriatric dealer's house. Edith works at the senior center and takes pills from there to resell to her teenage clientele. She's a sweet, unassuming grandmother figure, and it seems like she really doesn't understand how she could be hurting these kids.
I think that the other teens she meets at Edith's were my favorite characters. They're complicated, messy and well fleshed out. Josie is young, vibrant, pretty, and smart. She claims she does drugs because she's "board" but her family life seems like something she wants to escape. She's formed a grandparent-like bond with Edith, unless she's out of pills, and she aspires to go to pharmacy school. Josie's the most surprisingly layered character, and you find something new and intriguing about her in every chapter. Luther is the possible love interest, a basketball player larger than she is. He understands small town fame, and he also gets falling into drugs after an injury, but Mickey never lets them get close enough to find out. Finally, there's Derick who might be a totally different person when he's not falling over Josie, but Mickey will never know.

Plot: 5 This book is pretty stunning. McGinnis writes the spiral into addiction so well, taking a downword spiral I've seen in textbooks and bringing it to life in an organic way that makes you understand how it happens. There's textbook examples and classic signs that are woven smoothly into a narrative you can't put down.

Writing: 5 I think I have to applaud McGinnis most for humanizing drug addiction without glorifying it. Addiction to opioids is a major issue in America, and, while it needs to be stopped, conversations about the issue seem to ignore the fact that real human beings, each with their own stories, lie behind the overdose numbers. I think that every official involved in making decisions about how to address the crisis, along with everyone else, should read this book and keep it heavily in mind as they decide how to manage offenders.
I also want to applaud McGinnis on a writer note for two things. First, she has the perfect example of a thoughtful, well done trigger warning in the book. It appears right after the dedication and simply states, "This book contains realistic depictions of opioid use. Recovered and recovering addicts should proceed with caution."
I also love her prologue. It immediately establishes how far Mickey's drug issue elevates. It sets the bar and sets the stakes and allows her build to have more weight and meaning. The reader waits for the story to get to that scene for the entire book. It never leaves the back of your mind.


To Purchase
Related Posts:
Trigger Warnings Show Empathy: Here
Links of Interest:
Beyond High School YA List: Here
Into YA with LD Crichton: Here
All Our Broken Pieces: Review Here
What's Coming Up In May: Here