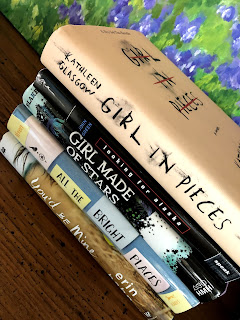 This week, YA Twitter was alight with controversy over a number of things this week (per usual, unfortunately). Most of it was run of the mill discussion over labeling YA and creating new genres (which I've talked a little about and I'll link below the posts below). But there was one conversation at the start of the week that baffled me a little. It started with a YA author tweeting something insensitive about trigger/content warnings. She basically said that they shouldn't exist because they spoil stories and that the world is hard and bad or negative things can't and shouldn't be avoided.
And the first thing I thought when I saw that original tweet, before reading anyone else's takes or more of the thread was "Wow. People really don't get what a trigger warning is and who they're for." Because trigger warning are put on media now for a small number of people who have a genuine need. It's a relatively new thing in books (and really most media) but becoming more prevalent, so I guess there's room for people to genuinely not understand. Whether the conversation was sparked in good faith or not, I just wanted to talk a little bit about how trigger warnings are a symptom of a more emphatic society for this discussion Saturday.

Before this week, I hadn't put much thought into the presence or absence of trigger warnings from the media I consume. If they're present (which they usually aren't), I skim them to get an idea of what's coming. They generally don't influence what I read, and, since my tastes tend to drift into the darker and more mature themes and books in YA, I generally expect this content even if there isn't a warning. Lots of times, the synopsis or the cover will give you a hint at what's to come, but that isn't always true.
I've read books where I've been blindsided by inclusions of self harm, drug use, sexual assault, or other elements. While that's not a problem for me, I could see someone accidentally stumbling into a book they would have otherwise avoided because of a pretty cover and sanitized synopsis. I see this happen most often with books that deal with abuse or sexual violence or assault. I generally know about these themes before getting into the books because I do a lot of research about the books I read, but I've been shocked to find their summaries dance around these central themes so vaguely that the content is easy to miss. By simply including trigger warnings in the front matter, readers wouldn't have to rely to marketing, design, and production teams to forewarn them.
Whether you have personal triggers or trauma or not, advocating for trigger warnings is an act of empathy and support for those who do. I don't understand bashing trigger warnings when they don't even have to be a part of your experience. Authors and publishers shouldn't be afraid of giving "spoilers" when certain themes could disrupt a person's recovery. Honestly, deep, painful trauma shouldn't be treated as your plot twist or surprise turn. I hope that those who choose to take on such important topics, especially when writing for teens, don't see people's real life pain as story devices or artistic choices.
But we can't fault well intentioned authors whose books don't have them either. From what I can tell, choices like including a front matter author's note or simply a list of trigger warnings mainly falls on the publisher and their decisions. Unfortunately, they seem to be shying away from this responsibility for fear that fewer people may buy the book. I don't really understand this logic because the goal should be to connect a book with those who will cherish it, not be hurt by it or dislike it. People should have the option to understand what they're emotionally investing themselves in.
And, likely, most readers, even those dealing with trauma, will continue forward, some with caution, in safe spaces with the awareness that they may need to stop. But they should get to have that ability to do what is right for them as individuals.
The world is draining enough, especially now, that books and entertainment should be refuges. Yes, they should offer books that explore tough topics to help educate some and give safe spaces to explore their past pain for others, but it should be from an informed point of view. Art, self exploration, and storytelling should never be a dangerous place, and trigger warnings is one way, that will be insignificant to most reader experiences, to help improve this.
Going forward, since books so seldom identify all possible triggers that aren't clear from the beginning or the synopsis, I'll be adding them to my posts to help you make the most informed possible decisions about the books you read. Considering small ways to help our fellow humans can make major impacts in lives overall, and the book community should be one place where we all strive to stand together.


If You Liked This Post...
Is YA For Me? Here
Social Media Sells Books: Here

Links of Interest:
Serious Moonlight: Review Here
This Book Is Not Yet Rated: Review Here
Into YA with Kathleen Glasgow: Here
How To Make Friends With The Dark: Review Here
Discussion Post Editorials