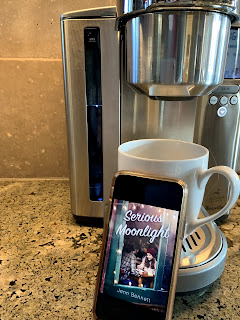 Serious Moonlight by Jenn Bennett (April 16) To Buy From Your Local Bookstore
Overview: There's a mystery to be solved. Actually, quite a few. There's the mystery of the boy from Moonlight Diner and the subject of a random hook up Birdie still doesn't understand. And then there's the mysterious author, Raymond Darke who comes into the hotel where she works the graveyard shift. Birdie loves mystery books, movies, and television shows, and they're her escape from her overly sheltered life. But, now, Birdie is eighteen, finished homeschooling, and braving Seattle for herself. Overall: 4

Characters: 4 Birdie is a lot of fun. She's quiet, mixed up, curious, and open. Originally, she lived with her young mom and her Aunt Mona, but, after her mom's untimely death, she moved in with her grandparents on Bainbridge Island. Her grandmother was overly sheltering after her conflict with Birdie's mother, and she homeschooled her to keep her confined. Since her grandmother died before she could write Birdie's diploma, she started working at the hotel. Birdie starts to take steps out of her little bubble of a world and she doesn't have a lot of context for most of her new experiences, so she has a lot of confusion and tons of personal mysteries to solve. She also has to figure out if she's brave enough to confront her probable narcolepsy and seek treatment.
Daniel Aoki was a hook up, Birdie's first, that she'd rather forget. And then he shows up as the night van driver on her first day working at the hotel. Slowly, though, he's able to prove that he genuinely cares to about her, and they start to form a really sweet relationship. Coming from a messy past and a messy, yet lovable, family, he's able to understand Birdie better than most.
Aunt Mona is also quite the character. She might as well be Birdie's mom for how close their bond is. Mona has been with Birdie from the beginning, and they work through their struggles together. While Mona's almost too eccentric to be believable, her bond with Birdie is really special.

Plot: 4 There are two major plots in the book, but only one had much development. The Birdie/Daniel romance makes the book worth the read. It's sweet, honest, and realistic. If that was all there was to the book, I'd say that the book was a little drawn out but overall solid. Instead, there's also the mystery of Raymond Darke. Which isn't really a mystery. It's really just a device to push the two of them back together, but that element wasn't needed. The hotel put them back in the same place as the same time. It feels like Darke was just a crutch. It was weird to have them be like "Oh ya... We're supposed to be solving a mystery."

Writing: 4 Jenn Bennett can write good romances. That was true with Starry Eyes and it's true here. It's cute, lovable, and also touches on realistic, serious topics. I love that the story also has older teens who are out of high school and trying to figure out what path is right for them. The only place where I tripped up was with the tense. It’s written in past tense, and, normally, I’m not usually bothered by whatever tense is chosen, but I repeatedly thought the past tense sections were error. It’s just didn’t fit the story. I wish the plot was a bit tighter and the book was maybe shorter, but it's still a cute, cozy romance.

To Purchase
Other Books by This Author...
Starry Eyes: Review Here

Links Of Interest:
This Book Is Not Yet Rated: Review Here
Into YA with Kathleen Glasgow: Here
How To Make Friends With The Dark: Review Here
The Seven Torments of Amy and Craig: Review Here

I received an ARC from the publisher in exchange for an honest review.
Buy links in this post are affiliate links which means I may get a small commission at no charge to you.
New Release Wednesday Reading Spotlight New Releases