How To Make Friends With The Dark 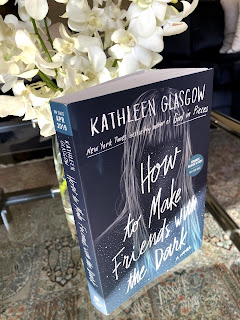 How To Make Friends With The Dark by Kathleen Glasgow (April 9) To Purchase From Your Indie Bookstore*
Overview: Tiger Tolliver has experienced the greatest tragedy anyone could imagine. Her mother, her sole parent, dies of a brain aneurism, and she's thrown into the foster care system. She's in shock, and all she can cling to is the dress her mother bought her for the dance- the ugly dress that she that she didn't ask for. Now it's all she'll wear. Then, one day, her social worker discovers a half sister, from the father she didn't know she had, who is willing to come care for her. Still in the now ratty dress, Tiger and her twenty-year-old sister try their best to make a life with each other, but it seems that Tiger still can't catch a break. Overall: 5

Characters: 5 Tiger is discovering who she is as her world breaks apart, and finding her self identity gets shifted to the back burner. Her life had always been defined by what her mother liked or thought was right, and she'd started to make her own choices like staying out and dating a boy when her mother passes away. Tiger doesn't have a real identity of her own to cling to in the wake of her loss or the upheaval of the system.
She does have some friends that help create a support system. Cake was her best friend before Tiger's life fell apart, but Cake doesn't understand what it's like to have nothing. Cake has two parents, money, and a high likelihood of going to college for music. Luckily, during her time in foster care and grief groups Tiger meets people like Thaddeus a boy who was adopted by one of the foster mothers Tiger stays with. He opens her eyes to some of the horrible things that happens to kids with abusive parents before they get put in the system. Everyone in the book gives an opportunity both for a reader to see themselves and to learn about some of the painful realities people they see every day could be going through.

Plot: 5 I can't imagine if my mom died. It's probably the one thing I'm most terrified of because, just like Tiger, I'm very close to my mom. As Tiger has to confront her whole world going dark, she has to deal with the deeply flawed foster system, and, later, a deeply flawed half-sister who isn't a parent, which is not a fault of either of theirs. As the book progresses, Tiger makes tiny steps forward, but they're always punctuated by shattering blows, and I just wanted to ask Kathleen when she was going to cut poor Tiger a break. Like Tiger, I had to keep repeating that there's always hope at the end, or, at least, there should be.

Writing: 5 This book made my heart hurt in the best way. Glasgow isn't a flashy writer. She doesn't make grand scenes with giant words and bold statements, and that's what I love about her. The quiet words and subtle sentences cracked my heart deeper than any loud siren book could. The resignation, the pain, the grief, the confusion, felt like my own. Glasgow made everything so real. And I love that, because it’s exactly what a book needs to do. Just like she broke my heart, she pieced it back together with more strength and love and empathy than before, and that's what makes a book perfect.
*Giveaway Alert* How to enter: Kathleen was sweet enough to offer a signed hardcover of How To Make Friends With The Dark and some book swag. (You don't know how jealous I am of all of you right now!).
To enter, visit my Twitter page (@readwriteandme) where there will be a pinned tweet with more details about how to enter. You'll just have to retweet and comment. Additional entries will be given to those who follow me on Instagram (@readingwritingandme) and Kathleen. This will close on Friday April 12 when I will chose a winner.


To Purchase
Books By This Author...
Girl In Pieces: Review Here
If You Liked This Book...
The Quiet You Carry: Review Here