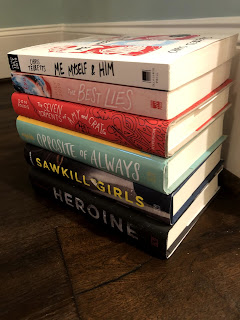 The conversation about how much social media and book influencers (not the best term, but I need a catch all for all the wonderful book bloggers, bookstagrammers, booktubers, and other people who talk about books) play a role in selling books has circled around again. Oftentimes, publishers discount the ability of the Internet and it's many areas to turn buzz into sales they can see. It's difficult to definitively quantify just how far an influencer's reach goes even when using special codes or affiliate links for tracking purposes. The nature of the way people use the internet to learn about books and buy new items almost negates the power of these tracking tools. I also think that certain kinds of marketing is more important to certain demographics. Since, I occupy a number of spaces in the book world, I thought I'd give my opinion on this issue. But, just so we're clear, the Internet and social media does sell books. It's probably one of the greatest generators of sales.

Before I talk about my experience as a blogger or the bit of statistics I do have on the issue, I want to look at it as a reader and what I've heard from other readers, particularly teens, since we should be who YA marketing is directed at most.
Even in the reading world, it's a nuanced and varied issue. I think that the importance and the amount that you use the Internet to source books comes from your level of involvement in the community. I live and breath YA. My personal Twitter is filled with publishers, authors and other book influencers. I'm constantly scrolling around looking for new books to buy, interesting preorder campaigns, and books that are discounted. Probably 98% of the books I hear and about and purchase comes from Twitter. But this comes from me being so involved. I think that I use this platform most over google searches or Instagram because people often use Twitter to shout out books that they're excited for or that they absolutely love. It feels so genuine. It's also an easier platform to access blog posts through because of direct links. The level of authenticity that a book is recommended with is a major component in getting me to read a book because I've gotten more selective about what I will buy.
The problem with this, though, is that sometimes I'll buy it right then, but, usually, it's a couple weeks later, and I don't have a way to share with publishers or sellers why I bought the book. Social media is word of mouth with an audience far larger than your best friend, and it's a powerful place because you form your own sort of relationship with reviewers you like. You trust their opinion on books like you'd trust a friend, but they never get any more credit for this than the occasional shout out.
And, like I said above, I'm far more connected to the YA community than most teens who just like to read. That doesn't mean that social media promotion isn't important for them too. Actually, it's probably more so. Teens will follow their favorite authors and maybe even publishing houses that they like to see what's coming out. If they're really involved, they might even have a few book bloggers that they'll follow, but, really, it's the books with the major marketing budgets, not for conferences or events, but for social media that reach them. The buzziest books, the ones that are the most pushed, reach the fringes of the YA space that casual readers occupy.
I saw this firsthand at Teen Book Con when it was time for the author signings. There were authors with books that I was super excited to read that had no lines, but, when I reflected on why I knew about those books, it was because I'm on NetGalley and Edelweiss. I scroll through catalogues of books that haven't been released yet and fall in love with books that way. But I'd never seen any real marketing for these books. At an event full of teen readers, where book buying mostly happens before you see a single author and most kids can only buy one or two books, you see how big of a role marketing in teen spaces plays in real time. The authors with the longest lines were the ones whose books had been promoted almost constantly for months on end. All that time floating around social media had created name recognition that did eventually lead to an increase in sales.

Now, as a blogger, I've also seen the power of the book influencer. I've had DMs, comments, and Tweets telling me about how a review has made someone go buy or borrow the book. I've had friends ask if I have a copy they can borrow. I've also spent weeks telling everyone I know, online and off, about books that I've fallen head over heels for. And I think that's the value of the blogger or other book influencer. Connect a book nerd with a book that speaks to their soul, and they'll never stop selling it. I've hand sold books to random strangers who have causally picked up a book I love in a bookstore. Finding people to put authenticity behind your advertising campaigns allows a genuine connection to form. With more people buying books online, book bloggers are becoming the booksellers that draw people to order a copy.
Recently, I started providing links to Indie Bound in all of my reviews. I want to make it easy for you to both buy books that you're interested in and support local bookstores. I did not start doing it again to make money. While the commission would be helpful, I just wanted to offer everyone the option, and I've seen first hand why affiliate links or promo codes don't work for track counting. The reach of social media influence spans far farther.
In the last little less than I month, I've had over sixty people click through these links to look at books I've written about. I have yet to make a commission because there are so many conditions to making any amount of money from it, or get credit for the sale.
There's so much that gets in the way of a finished sale that the clicks are a greater indicator of who will eventually buy a book than the sales total. People may buy it later when they can get to their credit card or when they've saved the money or when they have other books they want to buy. They may also get it from the library or buy from a lower cost seller. Those actions will never be counted and can never be turned into satisfactory data for marketing teams. It also discounts potential readers who never purchase a book at all but get it through libraries or friends. After they read, they become a vital parti in continuing to promote the book as well.
Beyond that, the people who have read my posts and reviews are a hundred times that of the sixty who chose to click the links each month. The outreach and personal connection that dedicated book influencers make with their audience grows the buzz for the book and supports the wider marketing campaigns put in place by the publishing houses.
Bloggers, bookstagrammers, and bookstubers can champion books that aren't getting the attention they should. They're the first indicators of the reader's reactions to new books because everyone in the YA community is there because they're a book lover at heart. Online communities have had the power to turn the tides for books. Social media has opened up a new world of tools and influence if people will take the time to drive into its many layers.
Discounting the value of social media and the Internet as a powerful bookselling tool hurts readers, authors, book people, and publishers in the end. Social media marketing is largely uncharted territory, but it is the future, and I'm excited to see it expanded to connect readers with their perfect book matches.


Related Posts...
Is YA For Me: Here
What I Want To See More Of In YA: Here

Links of Interest:
In the Neighborhood of True Excerpt: Here
Every Moment After: Review Here
What's Coming Up In April: Here
Comics Will Break Your Heart: Review Here