Every Moment After Review 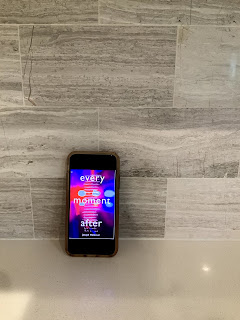 Every Moment After by Joseph Moldover (April 9) To Purchase From Your Indie Bookstore *
Overview: A whole class of first graders had their lives changed eleven years ago. Some of them lost their lives, some never walked again, and some had eyes permanently turned to them. The school shooting changed the town, and, even as the class is graduating, the grief still hovers over everyone. And, that summer, it hits two best friends particularly hard, best friends who were once part of a trio. Overall: 5

Characters: 5 Cole is an introvert, and he is probably made more so by being the boy in the picture. He became the poster child of the shooting when a picture of him getting carried out of the school is plastered on every newspaper and magazine cover. He's kept a relatively quiet existence, and, in the last year, he watched his father slowly deteriorate from pancreatic cancer. Finally, though, the summer before everyone goes their separate ways for college, he decides to go for something big, he wants to win over his crush Viola. Cole is a sweet, sensitive poet on the inside, and an average kid on the outside, but, as long as he's not the boy from the picture, he's okay.
Matt is his best friend- always has been. Matt is Cole's total opposite: loud, out there, reckless, and especially so as his survivor's guilt reaches its peak. Matt was in the class, but he was at home that day with his mom diligently tending to his blood sugar. I love that Moldover included rep for Type One diabetes. It's something that many teens face, but most people don't know a lot about it, and I've never seen a character in a book with it.
Those who fill out the rest of the town are equally interesting and affected by the shooting. Viola, Cole's crush, came from the UK at the start of freshman year. She's one of the students who wasn't in the original class but joined them later, and she has a hard time understanding what they all experienced. Then there's Chris and Paul who were both deeply affected. Chris his bound to an electric wheelchair after the power of the bullet, that didn't hit any internal organs, still disrupted the fibers of his spine. He only has used of one hand and is stuck in intense physical therapy to keep his body functioning. And Paul lost a twin brother. His parents worry over him because of his autism and because they already lost one child. Then there are parents like Mrs. Maiden who lost their children and try to cope by reaching out and staying involved with the class.

Plot: 5 While the shooting is ever present, the boys have their own stories and paths. It's striking to see how much Matt's survivors guilt comes into play over a decade later. Because he wasn't there at the shooting, he feels like he doesn't know whether he was meant to live or die, so he gets reckless with monitoring his sugars and takes many stupid swims across the lake to tempt fate and try to feel like he really does deserve to live.
Cole has to overcome the crushing loneliness he feels. When he tries to get close to Violet, he's forces himself to retreat, confusing her. He has mixed feelings about being stuck in town for an extra year, as everyone else leaves. In the end, the book is a story of two best friends who would do anything for each other and a town with every resident haunted by tragedy.

Writing: 5 This book is so honest and real and important. I think the teens who read it will identify with the boys and their fears for their future, the frustration that nothing is really being done to stop the tragedy. In a particularly poignant piece of imagery, the diner is covered in print outs of all the bills that were struck down in the House or Senate. But it's not the teens who need to feel the shattering sadness that is the undercurrent of the book and stays with everyone in the town, it is the adults that teens have to beg to do something.
I finished reading the book on the first anniversary of the Parkland High School shooting. It's amazing to see how strong the students are and how the turned the tragedy into a rallying cry to try to stop others from suffering the same pain that they will carry for the rest of their lives. Their message is both powerful and empowering, and I think books like this one are an important part of furthering the cause. Maybe if someone can't empathize with the headlines or can't feel moved by statistics or impassioned speeches, walking a mile in the shoes of two boys who are forever changed by tragedy, one that might have been stopped, will make them realize the palpable fear that runs through high school hallways now, even before the tragedy occurs. Even if it hasn't happened to them yet, students still carry that dread in the pit of their stomachs. The could it be me?