Comics Will Break Your Heart Review 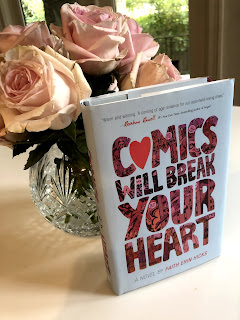 Comics Will Break Your Heart by Faith Erin Hicks (340 pages)
Overview: Comics collide with small town Canada when Weldon Warrick is sent to stay with his aunt and uncle in his dad's hometown for the summer after he gets suspended from school. He's the son of the CEO of the Tomorrow Man franchise, grandson of the co-creator. Miriam Kendrick also lives in the town. Her grandfather was the other creator, but her family settled the lawsuit that was fought for years over him getting pushed out of the company before it took off. Even though their families are supposed to hate each other, Miriam and Weldon start to fall in love. Overall:  4

Characters: 4 I really like Weldon and Miriam, but I still feel like I barely know them. I wish that they'd been dug into a little more because the makings on awesome characters are all over the page! Miriam is somewhat shy, she's insecure and unsure where her life is going, and she's not sure what she wants. She also doesn't want to admit she's into Weldon.
Weldon is the son of the CEO, but he's also from a divorced family and struggles with his relationship to his parents. He acts out for attention (and is fully aware of his own motives) and he really struggles with how his privilege and its side effects change the world for himself and the people around him. He wants to cast aside the benefits he gets from his family, but quickly finds that that's also not the correct approach. He doesn't come from a normal life or a normal position of social power, and that's something that cannot be simply ignored. I would have loved that conflict to be further explored.

Plot: 4 There is very little plot in this book, but the characters also don't play a great role which leaves the reader thinking "So what happened?". I wish that the plot was faster paced as the romance doesn't even really start till the last 50 pages. I found it hard to keep myself reading even though I loved the story's premise.

Writing: 4 I felt the mix of lack of plot and character development paired with the awkward third person writing left me really wanting more from the book. It frustrates me because the bones of the story is so good. I wanted everything to come together, I kept waiting for it, but I never felt like it came.
I do love the story, the look into the world of comics, and the glimpse into Canada and Canadian life. Faith had mentioned that all of those elements were her goals, and I think they were definitely achieved. If you're curious about comics and how it works, I'd still recommend you pick this up!


You May Also Like...
Wrap Up Of Teen Book Con: Here
Eliza and Her Monsters: Review Here
Tash Hearts Tolstoy: Review Here

Links of Interest:
Into YA with Erin Hahn: Here
You'd Be Mine: Review Here
Meet Me In Outer Space: Review Here
Is YA For Me? Here
Book Con Reviews New Release Wednesday Reading Weekly Reviews and Recommendations