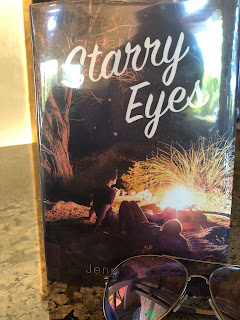 Starry Eyes by Jenn Bennett (417 pages)
Overview: Glamping should not include getting stranded in the middle of the woods with your ex-best friend. But life doesn't always go as it's supposed to. When Zorie agrees to go with her friend Regan and her crew on a summer camping trip, she doesn't know Lennon will be there, and she's certainly not expecting the group to abandon the two of them in the middle of the California wilderness, forced to complete a multi day track back to civilization. It turns out, though, that an adventure in the woods might be just what they need. Overall: 4.5

Characters: 5 I thought that all of the characters, including the adults, were given dimension. I loved the parental dynamic between Lennon and his moms as well as Zorie's relationship with her step mom who never considered Zorie less than her own daughter.
Lennon and Zorie are also awesome characters. Zorie has to battle her intense anxiety and relinquish control while she's stuck in the woods which forces a lot of growth for her character. Lennon, ever dark and mysterious, is full of much needed wilderness know how. He develops through Zorie breaking down some emotional barriers for him and allowing him the safe space he needed to truly process the last, awful year of his life.

Plot: 4 I enjoyed this story a lot. It's the perfect summer camping trip to contrast all the beach stories. Along with the romance that develops on the trail, Bennett did a great job with the subplot where Zorie is conflicted about whether to reveal the evidence of her father's cheating to her mother. The tension and its presence as she changes on the trail adds an extra dimension to the story.
The only aspect of the plot I didn't like, which thankfully didn't last very long, was the attempted love triangle between Brett, Zorie, and Lennon. It was painfully obvious that Zorie and Brett had no chemistry, and the real story lies with Lennon.

Writing: 5 Bennett has this aspect down. The dialogue was hilarious and sincere, the action fast paced. Even though the book was long, I never wanted to put it down. This book is the perfect romance with an extra flare of adventure.