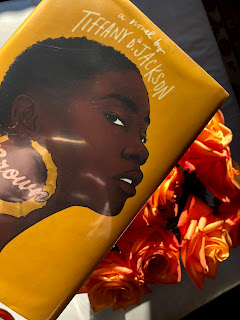 TW: (from the title page of the book) sexual abuse, rape, assault, child abuse, kidnapping, and addiction to opioids

Overview: Enchanted just wants to be a singer. Living in the suburbs, she doesn't know how this will happen until she gets noticed by Korey Fields at an audition. She doesn't make the show, but she gets taken under his wing. She just wants a career, and she wants to be loved, and she wants to be told she's beautiful. Korey does all that and more. He also has money and power- more things Enchanted lacks. She wants to be an adult and take life on, but she's fallen into the hands of an abuser and master manipulator. Coming out the other side leaves Korey dead and Enchanted trying to find her footing. Overall: 5

Characters: 5 All of these characters are extremely vivid. Enchanted is such a good main character. She has confidence and is so smart. But you can see her little vulnerabilities that Korey expertly exploits. It's clear to see, even before we learn the extent of his abuse, that Korey has really practiced his predatory skills. If you've every been coerced or manipulated in a romantic relationship  with an unequal power dynamic or read about people who have, all the small steps will feel well worn and familiar. It's a realization that all of these people have a pattern, and it's chilling. While you just want to yell, "Stop!" the whole time, Jackson draws the story in a way that makes each of Enchanted's choices understandable.

Her parents are also crafted perfectly to suit the story. They aren't absent or inattentive. Most parents of girls who go through this on a larger or smaller scale often aren't. They both love her, but they have their own concerns and struggles along the way. They want to watch over their daughter and do what's best for her while also allowing her to make her own choices because she's almost an adult. It's an impossible balance, and they believed they were doing everything right. Their repeated failed attempts to intervene as it intensifies shows just how intense the manipulation and power hold is from the abuser.

I also really appreciate how Jackson crafted Korey Fields's character. She managed to make him a three dimensional character without ever glamorizing, romanticizing, or justifying his behavior. We get hints at a possible why, but it's never an excuse. It never takes away from what's happening. Seeing him through Enchanted's eyes we see the charm that hooks her in, but to the reader, the warning bells are loud from the start. We, as the reader, don't have to fall for Korey to understand why Enchanted does, and that's so important. It's such a difficult story to tell well, and Jackson does it with the incredibly important sensitivity the topic demands.

Plot: 5 This book is an intense rollercoaster. We follow Enchanted in and out of abuse. We see her in recovery. We see her falling into his traps, and we see the painful, gross, difficult realities of her time stuck with him in incredible nuance. Jackson knows when to zoom in and when to pull off and leave some moments off the page. Again, she handles this with the care that is demanded. I never felt like she exploited the topic or played the dramatic moments for shock value. She also spends the time to build their relationship so that we understand what happens next. While there's plenty of drama and gripping your seat through the first 3/4, Jackson picks up the twists at the end. She makes you question the entire reality of the book and the reliability of the narrator and before turning it back around again without giving the reader whiplash or making them feel betrayed. The end is intense as the flashbacks to Enchanted waking up at the scene of Korey's murder culminate in a fast mystery to prove her innocence before it's too late. There's never a dull moment, and everyone I talked to couldn't put down the book, just like me.

Writing: 5 Tiffany Jackson always publishes masterclasses in her particular brand of true crime adjacent thrillers. While this one wasn't technically based on the R. Kelly case, the parallels are clear. The topic is handled with so much care and careful research blended with personal experience. She creates a horrifying larger than life stories that manage to stay so grounded. Also, the pacing is just incredible. The short burst chapters keep the pages turning. Despite my hectic school schedule, I read almost all 400 pages of it in three days. It's truly a portrait of the best YA can be when it's pushing on incredibly important issues and topics.

A couple points I couldn't fit into the above categories but want to emphasize: First, the book starts with a full page of trigger warnings, which shouldn't be as rare as it is in YA. Heroine is the only other book I've ever seen with it (interestingly also from a Harper press). Also, I wanted to emphasize some of the themes in the story that couldn't be more timely.

First, the variation of how the police treat Korey and Enchanted. For one, Jackson perfectly illustrates why women don't report the kind of abuse Enchanted suffers. They're questioned to death with an air of disbelief like they're the guilty party. It creates added trauma, and it's not a myth that justice is rarely served. Enchanted is mistreated both as an instant murder suspect and previously as a girl reporting sexual assault, stalking, and abuse. The police generally aren't here to help women. And, as Jackson emphasizes, especially not Black women. I found the consistent narrative of emphasizing that Enchanted had the cards stacked against her a million different ways because of both her gender and her race.

And, because this was a high profile incident, the comment section of the world weighs in, and I appreciated that Jackson tried to cover the public backlash as well. Enchanted is a victim to both racist and sexist attacks. Mirroring real life, the main comment whether they're condemning Korey or not is: Why didn't she know better? Why is that always the question? Even with as stark of an age difference and power difference between a poor 17 year old girl and a 29 year old influential millionaire, people still refused to point the finger (or entirely point the finger) at the known abuser. Enchanted gets skewered even with a small army of fellow victims of Korey Fields standing with her. It definitely humanizes and deepens the conversations both around power imbalances and their roles in relationships and abuse, how society pins the blame, and how our culture has a tendency to side with famous people and artists. She also brings up the idea of separating the art from the artist. While I generally fall on the side of saying that isn't possible, I feel like it shouldn't even be a conversation around known serial abusers. People who abuse their platform, celebrity, and privilege shouldn't be enabled by continual public support.

Anyway, Tiffany clearly struck a nerve with this book, and I think that's 100% what she intended to do. The book is quite heavy and intense, so use caution before picking it up and know that it's okay to put it down at any point, but it's such a timely and important read. It's easy for your eyes to glaze over seeing these horrible stories in the news. It lights a different fire in you to have to live it through a book. I hope we can keep this conversation moving past specific events in the news and books like this because these topics are too important to keep ignoring.

And, as a piece of literature alone, this book more than earned its place on the NYT list (even though that metric only has significance because we've all decided it does). Regardless of how you frame it, Tiffany is running the game.

This Is All Your Fault: Blog Tour Stop

How It All Blew Up