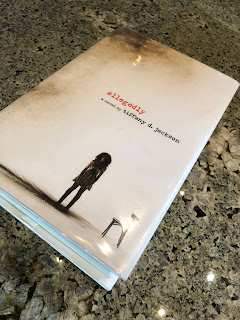 Allegedly by Tiffany D. Jackson (387 pages)
Overview: Mary may or may not have killed baby Alyssa. But she got convicted of the crime anyway. After spending years nine through fourteen of her life in baby jail, Mary is transferred to a group home that proves far more dangerous than her sentence. To add to her problems, sixteen year old Mary discovers she's become pregnant by her boyfriend she met volunteering. Mary must now figure out how to clear her name so that she can keep her baby. After all, it was only ever allegedly. Overall: 4

Characters: 4 Having an unreliable narrator definitely livens up the story. The reader's trust for Mary will eb and flow as the story progresses, though, ultimately, her stability is even more questionable than her trustworthiness. Sometimes Mary is level headed, sometimes erratic. The reader has a vague idea of certain pills she and her mother may be taking, but Mary never gives much of that away. Even though we are in Mary's head, we still have unsure footing.
I thought that there was a really great contrast of good and bad (in simplest terms) adults. Given the nature of the book, it would be easy to represent all adults as evil. On the flip side, we see adults like Ms. Cora, Mary's lawyer be a strong advocate for justice and even her awful parole officer, Winters, shows growth.
Her relationship with her mother is also unreliable and always shifting, not between them so much as in the reader's head as they collect information. The psychology of their reversed mother-daughter relationship makes you see Mary in a new light.

Plot: 3 There's unreliability and then there's having to put the book down and scratch your head thinking "what the hell?" I felt the latter after reading the last chapter. I loved never having sure footing throughout the story. It added an extra intrigue, but something has to be a solid fact when you want to turn everything else into a variable. The last chapter cut all the ties and then just left them be. I want to feel like I've known and grown with the character through the story. The ending almost made me feel like I'd waisted my time.

Writing: 5 I have to give it to Jackson, her on the page writing is spot on. It's immersive, strong in voice and fast paced. I loved how she inserted the bits of the case file in the middle of the chapters and she brought the action and the mystery so well, I didn't even mind the longer chapters.