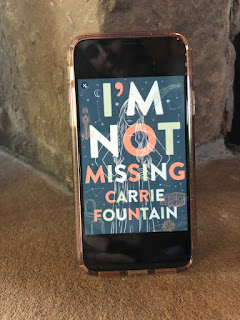 I'm Not Missing by Carie Fountain (July 10)
Overview: Syd always kept Miranda afloat. She was the loud voice to triumph over all of Miranda's insecurity. She was her guide to the world and the ultimate decision maker for every facet of Miranda's life. She was going to Stanford and getting out of her trailer park.
And then she's gone. Missing with no trace except for a note to make it clear she doesn't want to be found, Miranda tries to figure out what happened all while falling into a new life complete with her long time crush as her new boyfriend now that Syd is out of the way. Will Miranda find Syd? Should she even bother looking now that she knows what Syd's done? Overall: 5

Characters: 5 The secret sauce to good characters is authenticity. Fountain nails that. Every character in the story is so genuine to themselves and to each other. Miranda makes for an interesting lead as she's always been Syd's side kick. She has to learn how to lead her own life, and some reflection makes her realize that maybe Syd wasn't always looking out for her best interest.
Miranda's single dad also makes a great character as he's the parent every child deserves. Nick, Miranda's boyfriend is kind and super considerate while also being hilarious. And Syd, even though we don't get to see much of her on the page, comes out to be a well rounded, gray character.

Plot: 5 I was surprised I enjoyed this book so much. Usually a thriller/mystery like this turns out to either be predictable or maddening. The storyline with fining Syd followed the perfect arc for me. There was a satisfying ending, far from a bow but nicely concluded. I also liked the evolution of Miranda's family and romantic relationships.

Writing: 5 I loved the writing in this book. The story was gripping. The characters were complete. I felt satisfied with the twists and turns, and I genuinely came to care about the characters. I'm so happy that I stumbled upon this book.