They Wish They Were Us: YA Book Review 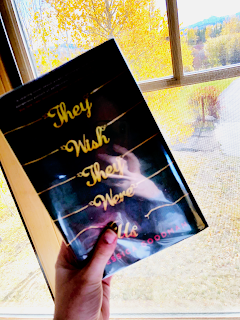 They Wish They Were Us by Jessica Goodman

TW: Murder/Death of a Teen (off page generally), violence, brutal initiation tasks, attempted sexual assault (on page but brief; it gets stopped)

Overview: Jill has always felt uneasy about being a Player. She worked hard and endured plenty of initiation torture to win her place among the elite group of high schoolers at Gold Coast Prep, but there's a sick feeling in her stomach as she finally takes her senior crown as one of their leaders. Maybe it was because of the brutal treatment she endured, maybe it was because her best friend Shelia died suspiciously initiation night. A fellow Player, Shelia's boyfriend Graham, got blamed for the murder before the night was over. That should be three years in the past, but a text from Rachel, a former player and Graham's sister stirs up all of Jill's questions again. Overall: 4

Note: I heard about and read this book because Halsey and Sidney Sweeny will be staring in the adaption of this book as a limited series. When the news dropped, I covered it on my music blog, so for more about the book, the show, the announcements, and some inside looks, check out that article.

Characters: 4 All of the characters are interesting. They fit a lot of the typical prep school archetype, but they all have their own secrets that make them human and flawed and complex. There's an interesting mix of personalities happening among the players. There's the artsy guy, the field hockey girl, the confident one, the theater kid, the spoiled rich boy. I liked getting to see where all their personalities started as freshmen in the flashbacks and how they either hardened or shifted after their initiation year. Nikki got more confident and Jill grew more steady. None of them have ever had to fall besides the initiation pops that seem like the worst of sorority initiations. With cheat codes, prestige, and rich parents (for most of them) means that the world is laid out on a silver platter. The book takes a deep look into the ramifications of that.

We see it all through Jill's eyes, which is a choice I appreciated. Jill is probably still the softest of the players. Her empathy hasn't been knocked out of her. She doesn't delight in inflicting the same pain that she endured on the freshmen, and she's insistent on changing how the Player's operate. Besides Nikki, Jill was the closest to Shelia, and that left a mark on her. It's why she's so determined to make sure the end of Shelia's story is correct. It's why she listens to Rachel when she reaches out again. Rachel has been dealing with the murder resting on her brother's shoulders and the Player's guilt for a while. She rushed through Cornell and escaped to NYC where she could be anonymous. Rachel's been written off by Gold Coast, but Jill places trust in her. The senior players have their own stories that are just as twisted. There's a shocking number of characters that get developed through the book.

Plot: 4 I'm not sure if it was me or the book, but it took me a while to get through this one. I found the writing to be dense, but that built that atmosphere. It just read slower. Also, every chapter is packed with a detailed flashback, so that slows down the plot as well. They're all important to understanding everything that's going on, but it'll slow you down too. As far as the mystery goes, my gut had it solved from the first third. I don't knock books for me figuring it out ahead of the reveal (though I tend to be pretty bad at it) because that means the clues were laid out, but if you like a surprise, I don't think you'll find one here. It's more about the journey than the destination.

Spoiler (no names revealed): The final conflict scene has that classic confrontation scene where they go to tape the confession and then get beaten up and wake up in the hospital. That scene is so played out, I didn't find it super interesting, and I did knock my rating for that. It could've been more creative.

Writing: 4 I liked the book. The atmosphere is great, and I think I need one good prep school murder mystery a year. Last year it was People Like Us. And as a book in that vein, it delivered. I liked that there was also a lot of focus on the Players and the toxic environment there. I find it fascinating how humans seem to be inclined to force the suffering they endured on others as redemption or something because I so don't understand that impulse, and that is thoroughly explored here and a major theme. I liked that focus more than I liked the mystery through-line.

Most of all, I think it'll make a great, creepy, Riverdale-esque drama (please let it be more cohesive). As a mini series, I'm hoping they'll be able to dive into all the nuance in the book. I can totally see Halsey as Rachel, the mysterious former player, and I'm excited to see Sydney in a non-Euphoria role.

More About The They Wish They Were Us Adaption: The Player's Table

Back To The Badlands Book Tag

This Is All Your Fault Tour Stop