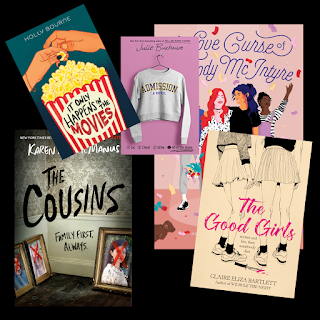 I can't believe this is the last "looking forward to" post of the year! The next one will be for 2021. I'd love for someone to tell me how that happened. Here's my quick list of five books that have been on my radar for months. Many of these are finally getting published after being pushed for COVID. I'm happy they'll finally be coming into the world. I'm sure I've forgotten so many amazing December books because I kept finding ones I'd accidentally skipped as I picked books for this list. Let me know in the comments if you're excited for a new YA I didn't mention here. As always, if you'd like to pick up a copy of any of these books, I'd love it if you'd consider shopping through my Bookshop, which means I'll get a small commission to support the blog at no cost to you. Just click the preorder button under each title or shop from the full list here!

The Love Curse of Melody McIntyre

Melody is organized and ready to stage manage the school play to perfection. After swearing off dating during play season after the horrible mishaps that have befallen her before, she's more confident than ever that Les Mis will go off without a hitch. That is until Odile auditions for the play's staring role. She's a rising star in the acting world and just as funny and nice as she is talented. Melody is going to have far harder time resisting romance than she intended.

Tropes abound in the high school world, and this might as well be the Breakfast Club for how many labels are given out in the description. Emma Baines was murdered, and that's all that matters at the moment. The suspect list is shaping up to include the Valedictorian, the biggest partier, and the head cheerleader. Emma's place in the social hierarchy was the good girl. But everyone isn't as flat as their labels would lead you to believe, and the answer to who killed Emma isn't as simple as it might appear.

We've all heard about the college admissions scandal. Now, there's a YA book digging inside of a fictional version. Chloe finally has everything lining up in her favor. Prom is set to be a dream, she's as popular as ever, and her mom's B list acting career is finally getting a lift. And then the FBI shows up and arrests her mom. Chloe might face charges as well for lying on her college entrance applications. She's forced to realize what she's taken for granted as her world comes crashing down, and she has to reconcile why her parents thought cheating was the only way for her to succeed.

Julie is already a major name in the YA world. One of her early books was the second YA book I ever read. Her most recent, Hope and Other Punchlines, was a favorite from last year.

It Only Happens in the Movies

Audrey doesn't believe in love. Her parents are going through a divorce, her friendships are shattering, and she's never had a relationship with someone she's dating work out. She's rightfully not a fan. But then her coworker, Harry, shows up completely adorable and bursting with light. Maybe Audrey isn't so over love after all.

This book has been out for a while in the UK, but in the US, it's finally making its debut. I'm a huge fan of YA set in the UK, so I'm super excited for this one.

Milly, Aubrey, and Jonah don't know their grandmother. She's rich and repulsive, and all of their parents have been disinherited. When the three cousins get invited to her island resort for the summer, their parents see it as a chance to get back into grandmother's good graces. The teens are hoping to uncover some truth behind the family secrets. It's much darker and twisted than any of them anticipated.

I Would Leave Me If I Could