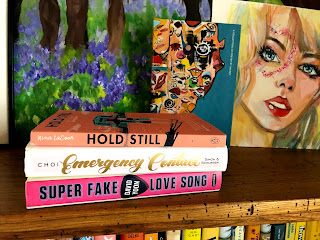 Last night, I had the most magical reading experience, probably because I haven't read for fun since maybe October or the first week of November. I've been carrying Admission around the house since it arrived at my house on the first day of December, and I'd gotten to maybe 20 pages. Last night, I finished drafts on my last two papers and didn't have the brain power to keep doing stuff for college, so I picked up the book and started reading. Three hours and well over a hundred pages later, I just felt a thrill. Like I remembered why I liked reading and YA after all cause I was starting to wonder if I just didn't love it anymore. Turns out my brain has just been at max capacity and everything I've had to read has been awful lately. It's really annoying. But I'm glad I still love reading and YA, and it even made me want to start writing prose again, which I've done none of since the semester started. I tell this whole story to preface that I decided to make the TBR for my December/January break. I feel like knowing what I'm going to read will make me more efficient and keep me constantly reading something instead of wandering around confused. So I decided to ask everyone on Twitter and Instagram what books off my TBR they think I should start with. I've included both e-ARCs and books that have been on my physical TBR for too long, so here's what I'm going to start with as my goals for books to finish for this break:

Twitter and Instagram might shift after I write this, but it seems pretty set. Here is my "You Decide What I Read for the Holidays" TBR:

First up, I want to tackle my physical TBR, and everyone thinks I should start that with Frankly In Love by David Yoon. I preordered this book but never got around to it, so I'm excited to dig into it. I've heard some mixed reviews, but I'm hoping I'll love it since I love books that have a musical element.

Next from the physical TBR pile is Hold Still by Nina LaCour. I bought the special re-release version in paperback when it came out last year. The cover matches with We Are Okay, and I love how they go together. I'm not sure why I haven't read this yet because I enjoyed We Are Okay, and it was one of the first books I ever reviewed on here. I like LaCour's simple prose and bluntness, and I'm excited to dive into this.

Getting into ARCs, Twitter made the unanimous choice that I needed to read She's Too Pretty To Burn by Wendy Heard first. Nobody voted for any of the titles, which I was surprised to see. I'm excited to sink my teeth into a thriller! Everything that's been chosen for me so far have been so different, and I love it. This end of summer story in San Diego follows Veronica as she's on a quest to reignite her creative spirit for photography with her best friend Nico, a performance artist. That is until Veronica meets Mick who becomes the perfect muse and dream girl. Apparently somehow there's a fire, two murders, three drownings, and a stalker that follow their love story. This is a play on The Picture of Dorian Gray, a book I'm unfamilar with, but I love the cover art, and I'm very intrigued.

Next up in the 2021 ARCs, I'm going to read Be Dazzled by Ryan LaSala. I made a whole separate poll on Instagram in an attempt to get people to vote for this book because I've wanted to read it since I got my approval. I love Ryan's Twitter presence, and I'm excited to read his book now that he's releasing a contemporary. Also, it has cosplaying? Like this book is made for me.

The third ARC on my list that's starting to look more ambitious is Cool for the Summer by Dahlia Adler. It's another bi girl romance, so of course I'm excited about it. My only problem with jumping into this one right away is that it doesn't come out till May and reading it before my January/February/March books feels more than a little irresponsible.

The fourth and final ARC that I'm hoping to get through ended in a tie. I guess I'll follow the poll if the numbers shift, but for right now, I guess I'll decide based on what I'm in the mood for. The two options are Hot British Boyfriend by Kristy Boyce and Happily Ever Afters by Elise Bryant. HBB is about a girl who has a whirlwind romance during her study abroad program in the UK and falls in love with a British guy. Considering this has always been one of my favorite daydreams, this sounds like a fun, fluffy romance. HEA is about a romance writer who writes the story she's never seen herself in as a Black woman and gets to go to a fancy writing program, but when she arrives, she loses all of her words. As Tessa tries to find her voice again, she loses herself more and more until she jeopardizes everything. Both of these books seem equally matched as fluffy YA romances.

Finally, I want to try to do a reread. I never do those because I get bored so easily and feel this echo in my head when I read books I've already finished, but there are so many books I love and want to experience another time. I have no problem rewatching TV/movies/videos, but I've never gotten through a book reread outside of poetry and childhood. I figure I'll give it a shot if I finish my entire list early. My main contenders are Emergency Contact by Mary HK Choi, You'd Be Mine by Erin Hahn, and Look by Zan Romanoff. Right now EC is winning, but I think I'm going to pick in the end based on whatever I'm in the mood for at the time.

I'm going to post a giant list of all of the 2021 ARCs I have right now and books I can't wait for next year soon, but I wanted to add a couple more books high up on my personal list and releasing soon that I'll read if I somehow finish all 5 books early.

This Will Be Funny Someday by Katie Henry

You Have a Match by Emma Lord

As Far As You'll Take Me by Phil Stamper

The Project by Courtney Summers