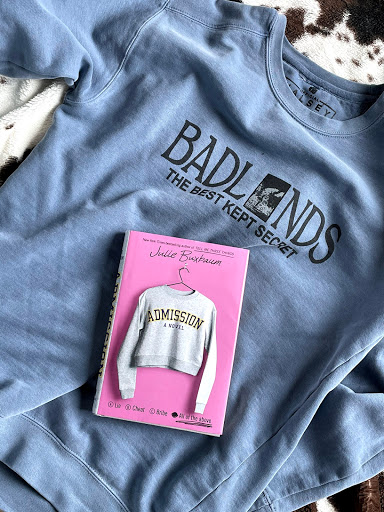 Overview: Chloe has always lived an upscale life. Her mom is a B list actress who's found steady work in Hallmark movies and sitcoms for the last twenty years. Her dad is a venture capitalist. Even though they might not be as rich as private jet flying Aunt Candy, Chloe never thinks about money from her giant house in Beverly Hills. Life isn't perfect, but it's remained generally uncomplicated until college admissions season. Told in a dual perspective, we watch Chloe open the door to FBI agents ready to haul off her mom while zooming back in time to see where it all went wrong. It's a complex story full of moral gray and confusion over who the villain truly is. Overall: 4

Characters: 4 The biggest thing to know about this book going in is that it's basically fan fiction of the college admissions scandal. All of the details are exactly there or tweaked slightly. The school Chloe cheats to get into is called SSC and is still a Southern California university that is exactly like USC. All the details of the case are basically the same, except Chloe is a pole vaulter instead of a rower in this scheme. Her mom is a B list actress. The YouTuber element isn't attributed to Chloe's family, but one of the girls also caught in the scandal is a successful YouTuber. Chloe also shares with her real life counterpart the desire to go to college for the fun and the parties. Chloe's never been great at school. It never came naturally like it did to her younger sister, Isla. She isn't the monster the scandal makes her out to be, but she's also not blameless. She's never really interrogated her privilege and sometimes says things that are ignorant to how lucky she is in life. While it's annoying and wrong, it's also hard to blame Chloe, who has grown up in such a bubble she doesn't have much of a frame of reference outside of it. Chloe is sort of played off as kind-hearted but too oblivious for her own good in every way.

Her parents are both involved and removed. They're deeply entrenched in the game of flashing their wealth and status. While there's an element of them wanting to do what was best for Chloe at any cost, it's easy to see that pride and bragging rights were probably the two biggest factors in them entering the scheme. While Chloe would've been fine, maybe even happier, at a mid-level college living the sorority girl life, that wouldn't be as flashy at charity get togethers. It's she same reason Chloe and her sister Isla go to Wood Valley, the most prestigious LA private school. I think one of the most interesting commentaries the book had was the subtle one drawn from their parents. How many parenting choices in these upper echelons of society are about appearance over the child's best interest?

Isla is the best character in the book by far, or maybe I'm just partial to her because I identify with her most. Isla is a year behind Chloe in school, and if she was the first child, none of this would probably happen. Isla is smart, too sensible and logical for her own good, and an incredibly hard worker. She's not a part of the scandal at all, but she gets pulled into it with the rest of her family, ruining her perfectly plotted out life. Her family always just assumes school and life is easy for her because she does everything to the expected degree while Chloe has always struggled. As the case goes on, the wear on Isla gets more and more apparent, and everyone is forced to realize how forgotten she's been. I love the ending that she got.

Finally, there are Chloe's friends. The before chapters have a love story where Chloe finally lands her longtime crush. It also delves into her friendship with Shola. She's a scholarship kid and her parents are both Nigerian immigrants, so she's never felt completely at home at Wood Valley. Shola is loved at Chloe's house and vice versa despite the different ways they've grown up. Though they both envy each other in different ways, they've always gotten along. Still, it wears on Shola when Chloe's unchecked privilege becomes more apparent, and Shola stresses more and more about getting into Harvard when everyone else at the school has the benefit of a private college coach, legitimate or otherwise. While sometimes it feels like Shola is in the story to create learning moment after moment for Chloe, which isn't okay, the way that Shola leaves things with Chloe makes it feel like Shola has much more agency than she originally appears to.

Plot: 4 The book is fast paced. I finished most of it in two giant chunks of reading because I couldn't put it down. While I was mostly interested in the present timeline, I didn't find myself skimming or rushing through the past chapters because they helped build the weight of the story. There were subtle unreliable narrator vibes as the story builds from "I didn't know anything" on Chloe's part to what added up to a fare amount of knowing in hindsight. It's pretty gripping, even though you know a fare amount about how it ends, and I have to applaud the ending particularly. I feel like it was a balanced ending where everyone got what they deserved, but there was also a glimmer of hope for the heroine, even though you're still how much you want to cheer her on.

Writing: 4 Like I mentioned, the writing flowed nicely. The dual timeline was well done, locking into one another nicely to give the right information at the right times. It helped to show Chloe's growth and her slow journey to being less oblivious. Buxbaum layers the intricacies of the situation together well. While their situation is obviously despicable, I think it shows just how messed up the college admissions process is on the whole that people are pushed to these extremes. Everyone in the book, even those who did everything the fair, honest way, were pushed to the brink, molding their lives to fit a system that doesn't serve anyone. Clearly, legally and ethically, Chloe's family did horrible things, but with the amount of privilege they have and a culture that buys libraries and rigs the system in other ways, it's not hard to see why they felt it was okay. It's weird reading about a main character who is obviously the villain but mostly the villain out of ignorance. I feel like this complexity was handled well. I don't know how much of a round of applause I can give it, though, because it truly is such a rip off of the scandal we all know inside and out.
I wish that maybe she'd strayed farther from the personality archetypes of the case or made it more her own, but the book was still a fascinating read regardless. I also liked that Buxbaum managed to work in nods to her prior books subtly into some of the chapters.

More By This Author...

Hope and Other Punchlines