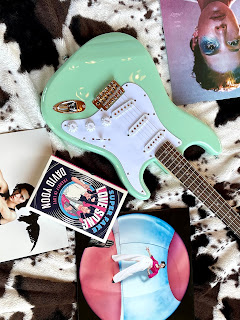 Overview: Sunny Dae is sick of his California neighborhood where everyone pretends to be something they're not to keep up with all the other rich families. He's happy in his own world, LARPing with his friends, even if he gets made fun of for it at school. That is until Cirrus comes into the picture. She's undeniably cool and he's undeniably a loser in everyone's eyes, so he finds a new personality. He borrows a life from the coolest person he used to know, his older brother Gray, who's on his way to becoming a rockstar. Of course, lies like that always fall apart, and the music industry is unforgiving. It's a long fall from the top. Overall: 3

Characters: 3 This is the weirdest book I've ever read, which I'll get into more later. One part of that is the book is basically only told in details. You'd think this would help with characterization, but so many characters are left completely flat. Sunny is unashamed of his nerd status till he meets Cirrus. As the book progresses, he discovers he likes being Gray more than he likes being himself. This is an interesting realization, and I think it's an interesting avenue of growing up. We've all pretended to be the person we'd rather be until we decided if that was working for us. It's an idea not explored enough in books about swapped identity, but my problem here is we don't see it happen. Sunny just says it from time to time as he dumps all his old activities and then is like "I used to be cynical because I was insecure". He learns all the right lessons with none of the journey. Also, I guess this is a spoiler, but at the end of the book, he goes back to being the exact same person he was before the book? It just didn't feel satisfying. I'm still confused at how Sunny was like "I'm going to be a rockstar like Gray" and was basically immediately good at it? Like Gray spent years and years building to where he was, and Sunny does it all in a month? Music isn't that easy.

Moving on to everyone else, almost all the secondary characters are painfully flat. Cirrus has no personality other than being the "cool girl". For driving all the conflict in the book and Sunny's whole personality, I have no clue why Sunny likes her so much or why he'd go to such extremes to impress her. Also, she never showed that she wouldn't like true Sunny? She just assumed something about him and he ran with it. Also, his best friends Milo and Jamal are there to LARP with him when he wants to and support his fake band, begrudgingly, the other time. The only defining characteristics we get about them are that, with Sunny, they're the only people of color at school besides a couple girls. I wish they had some personality outside of reacting to whatever Sunny wanted. Then we have Gunner. Neanderthal football player bully for years turned secret Dungeons and Dragons player, and Sunny's new bestie. This switch happens in actual seconds. I'm still confused about it. He goes from physically tormenting Sunny to being his friend for no reason, and Sunny just lets him. Sunny even feels bad for him. I grew up getting bullied all through elementary and middle school, and I sincerely don't understand how that switch happened. I would never trust any of those people again. Finally, his parents were flat as can be. His dad had a weird habit of ending every sentence with "dude" despite being an uptight businessman too busy for anyone else. The characters said so many weird things that made no sense. My head is still spinning. Like Sunny, they had a good arch that was completely unearned. One day they just kinda woke up and realized they were doing everything wrong.

Honestly, the only reason I kept reading was for Gray. Gray is Sunny's older brother who ran away to LA to make it in music. He comes back three years later in total crisis. He becomes a different person, going to his father's business interviews and networking at the country club. He also helps Sunny pull his band together. But he goes through an actual journey of the depression of realizing you either failed your dreams or your dreams failed you. His story arch is the only one that was fully realized, ironically. I related to Gray a lot, and he was genuinely insightful and funny and properly messy. For as quality of an arch he got technically, it was still very much a depressing tragedy of the reality of life.

Plot: 2 The short version of this book review could be: no plot, all details. Basically, the story is: Sunny falls for Cirrus, Sunny changes for Cirrus, that blows up in his face, he loses the girl, he goes back to being himself, he gets the girl. It's the typical pattern of books with this trope, but the plot points were messy, all over the place, and horribly timed. There were so many unnecessary details and descriptions and weird choices that it was hard to keep sight of where the story was going. Then, the big blow up on band night is a blur that leaves everyone mad, and I'm still not entirely sure what went down there. The book is so confusing and lost in a million knots inside itself. I feel like I got stuck reading this as a punishment for musing, "Why do books even need plots. Give me 300 pages of characters" the other day. I mean, the characters weren't well done here either, so I don't think I've been entirely disproven, but I admit- plot is important. I just kept wondering, "What happened to the editor?".

Writing: 3 To the point I made in the plot section, I figured the book would be detail heavy. I read Yoon's debut, Frankly in Love. That book was nothing like how it was marketed (for the better) and was very character and detail intensive. He succeeded in that book with it, though. The character was fully realized, and you learned the rhythm of Frank's culture and family life. It felt like a slow immersion in the world. Key word, slow, still, but not bad. This book, on the other hand, was not good at all. And I did get warned by a blogger friend that she DNF'd it, but I'd already bought the book, so I felt like it was too late to back out of it. This book managed to hold elements of everything I love in a book and still turned out to be a reading experience I couldn't wait to get over with. I usually have a policy against writing bad reviews, but I bothered to read the whole book, so I wanted to talk about it. Gray was the highlight by far. Otherwise, it was generally tedious, and it left me feeling more confused than anything.

More by this Author...